Start a Wiki
watch 01:27
The Loop (Movies)
Do you like this video?
Clan MacGuffin is a Scottish clan in Brave. It is one of the four clans that have united to form the DunBroch Kingdom. Its leader is called the Lord MacGuffin. The clan's tartan is green and orange. Its emblem is the cauldron. According to the promotional clip A Royal Bash, the MacGuffins have a legend relating to their symbol, which states that a with one potato, a magical cauldron fed the entire clan and gave them the force to slay 10,000 Macintoshs. The term MacGuffin is best known as referring to an object, goal that the protagonist is willing to do anything in order to achieve. 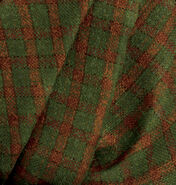 Concept art of emblems of the clan

Add a photo to this gallery
Retrieved from "https://pixar.fandom.com/wiki/Clan_MacGuffin?oldid=94835"
Community content is available under CC-BY-SA unless otherwise noted.