Start a Wiki
watch 01:21
The Loop (Movies)
Do you like this video?
Clan Macintosh is a Scottish clan in Brave. It is one of the four clans that have united to form the DunBroch kingdom. Its leader is called the Lord Macintosh. The clan's tartan is mainly red and green, similarly to real-life Macintosh tartans. The clan's emblem is the lyre. According to the promotional vignette A Royal Bash, the Macintoshs have a legend relating to their symbol, which states that a magical tune played on the lyre slayed 1000 Dingwalls. Macintosh is the name of a real Scottish clan, but is also the name of Apple's line of computers. 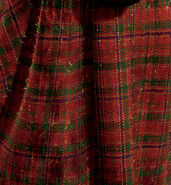 Concept art of emblems of the clan

Add a photo to this gallery
Retrieved from "https://pixar.fandom.com/wiki/Clan_Macintosh?oldid=94833"
Community content is available under CC-BY-SA unless otherwise noted.