Cars
Claude Scruggs is a character in Cars.

"Some would say that Leak Less Adult Dripping Pans is not a prestigious sponsor, but Claude Scruggs would disagree. He's been the #52 yellow, black, and white for more than two decades, and he wears the Leak Less logo with pride. His fan base might be a bit older, but thanks to the automotive boom of the late 1940s, there are a lot of them. Their enthusiasm for the sport and for Scruggs is so intense they can barely contain themselves."[1]

Claude is seen in the big race at the beginning of the film. He was overtaken by Lightning McQueen and spent most of the race behind No Stall's #123 Todd Marcus. When he was involved in a giant crash, he was tipped upside down by Todd and ended up getting jumped on by McQueen. The names of his pit crew are unknown except for his crew chief (Earl Filter) and one named Stacy. He races for the team "Leak Less Adult Drip Pans".

Claude getting passed by Lightning

His sponsor is shown in WALL•E. 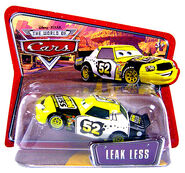 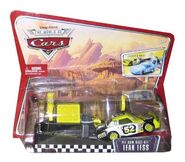 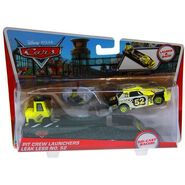 2013 die-cast launcher
Add a photo to this gallery

Retrieved from "https://pixar.fandom.com/wiki/Claude_Scruggs?oldid=229619"
Community content is available under CC-BY-SA unless otherwise noted.