"Keep your station clear, or I will kill you!"
—Colette to Linguini

Colette Tatou is the tritagonist of Ratatouille. She is Linguini's co-worker and eventual girlfriend.

Colette is the only female cook in Skinner's kitchen at Gusteau's. She is a capable, hardworking cook, who braves the intimidating masculine world of haute cusine. She was defending Linguini from being fired as a garbage boy when Skinner caught him "cooking" the soup in which Remy had made. Colette takes Linguini under her wing and teaches him the skills necessary to survive in the fast-paced kitchen. Initially unaware of Linguini's admiration for her, Colette realizes her affection for the russet-haired chef after Skinner takes a personal, albeit feigned, interest in him.

The next day, she tells a sleepwalking Linguini (puppeteered by Remy at the time) that she likes him, and storms out after mistaking his lack of reaction for snobbishness. Linguini awakes and struggles to tell her the truth.

Initially, Colette is puzzled by his actions and raving behavior and slips a hand into her bag for a canister of mace. Remy desperately makes Linguini fall onto Colette to prevent him from talking further and the two kiss. Colette is equally surprised as Linguini, but quickly falls in love, dropping the mace. A romantic relationship quickly blossoms after this incident.

When Linguini suddenly inherits the restaurant when Remy successfully steals papers and will that testify that Linguini is Gusteau's secret son, he and Colette run the restaurant. Food critic Anton Ego arrives with a challenge for the restaurant, and Colette prepares only to discover that Linguini had no ability to cook. When Linguini defends Remy, Colette listens to his claim that the rat is the real cook. Feeling betrayed, she tearfully leaves him. However, she remembers Gusteau's motto: "Anyone can cook" (a phrase she deeply believes in) and returns to aid Linguini and Remy in the cooking.

Ego is successfully dealt with, and he requests to see the chef. Reluctantly, she allows Remy to be unveiled as the true chef and Ego leaves, reformed. Later, Gusteau's was closed down due to rats in the kitchen, but Colette has found cooking at a new Parisian bistro, along with Linguini and Remy, with Ego as a patron and queues stretching around the block.

Colette is a very tough, assertive woman who is very hardworking. She is very fierce and strong, as shown when she is forced to train Linguini, and immediately sticks knives in his sleeves as she tells him she won't let a new trainee screw up all of her hard work. During her training with Linguini, she scolds him for taking his time while cooking and later threatens to kill Linguini if he can't keep his station clean. Colette herself states that the reason she is the only woman in the kitchen where cooking is regulated "by rules of stupid old men who make it impossible for women to cook" is because she is the toughest cook in the kitchen.

However, despite some of her tougher qualities, she is a firm fan and believer in Gusteau and his famous motto: "Anyone can cook." She has also memorized all of his recipes by heart. Her strong belief in his words causes her to defend Linguini from being fired by Chef Skinner, saying that it would betray Gusteau's words especially after Solene LeClaire said she liked the soup he made. Her belief in Gusteau's words is so strong that despite being betrayed by Linguini admitting that he was not the great chef he was made out to be, she goes back after remembering Gusteau's words and later works together with Remy (while the rest of the staff left after thinking Linguini was crazy) as a cook in Gusteau's and later in Remy and Linguini's bistro, La Ratatouille. 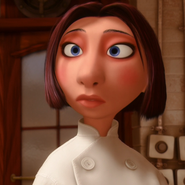 Linguini kissing Colette
Add a photo to this gallery
Retrieved from "https://pixar.fandom.com/wiki/Colette_Tatou?oldid=209688"
Community content is available under CC-BY-SA unless otherwise noted.