Coral is a supporting character in Finding Nemo.

"With a new home on the reef, a sea view, and several hundred babies on the way, Coral seemed to have a sweet life in store for her. That is until the dark day a big barracuda stopped by for dinner. In a terrible attack, Coral's dreams turned into a nightmare."[2]

Coral is Marlin's wife and Nemo's biological mother. She was shown in the beginning of the movie where she and Marlin are watching over their 400 baby eggs. They were excited to be first-time parents and discussed the eggs' names. Coral says she likes the name Nemo and Marlin says only one can be Nemo, but he wants the rest to be Marlin Junior.

They later play with each other for a while until Coral is distracted by a Barracuda. Marlin tells her to get back into the house. Coral moves to protect the eggs and the barracuda lunges at her. As Marlin rushes in, the barracuda smacks him with its tail, knocking him into unconsciousness.

When Marlin wakes up, he discovered that Coral and the eggs are gone. Marlin then found a single remaining egg which he named Nemo, and promises never to let anything happen to him. 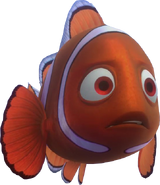 Retrieved from "https://pixar.fandom.com/wiki/Coral?oldid=231632"
Community content is available under CC-BY-SA unless otherwise noted.