The Cozy Cone Motel is a motel in Radiator Springs owned by Sally comprised of several large traffic cones that serve as the motel rooms. Lightning McQueen stayed in this motel for a short while. It is shown in the films Cars and Cars 2, along with in some of the Cars Toons episodes.

When Sally decided to stay in Radiator Springs, she bought and restored the Cozy Cone. She offers maps and Lincoln continental breakfasts among other amenities. 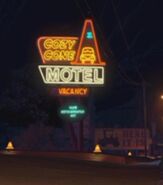 Outside view of the motel