Cruz Besouro is a minor character in Cars 2.

"You'd think being born and raised in tropical Brazil would make Cruz Besouro the most laid-back crew chief at the WGP. Not true. Although air-cooled, that hasn't stopped Cruz from being one intense little Beetle. He's been known to put 100 kilometers on his odometer in one race just by pacing back and forth while he barks instructions in the pits. On the other hand, his driver, Carla Veloso, is pretty used to it, and she always responds with a level head. Cruz may be aggressive, but his technical knowledge of racing makes him the best chief Brazil's ever known ! Pra Caramba! "[1] 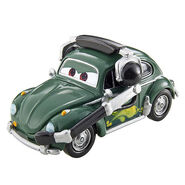 Cruz's and Carla's die-casts
Add a photo to this gallery
﻿

Retrieved from "https://pixar.fandom.com/wiki/Cruz_Besouro?oldid=93426"
Community content is available under CC-BY-SA unless otherwise noted.