Darrell Cartrip is a supporting character in Cars, Cars 2, and Cars 3. While his good friend, Bob Cutlass, is a more laidback commentator, Darrell is famous for his enthusiastic outpourings.

A southern gentleman and ex-Piston Cup champion, DC knows what it takes to win. He's in the booth with Bob Cutlass for every major Cup event, calling the play-by-play and adding humor and personality to the commentary. But when the flag drops, he's all business, that is until he shouts his signature, "Boogity, Boogity, Boogity! Let's go racing boys!!"[1]

In Cars, Darrell Cartrip is one of the two Piston Cup racing announcers. He is a sporty, fun, and comedic announcer that was absolutely shocked when Lightning McQueen, The King and Chick Hicks created the first ever 3-way tie in racing history.

During the final race, he comments on McQueen's actions on helping The King, stating that he's giving him a slight bump draft following his crash to Chick Hicks, despite Bob Cutlass wondering if the move was legal.

"Darrell Cartrip is a legendary multi-Piston Cup champion turned beloved racing announcer. The Kentucky-born #17 Chevrolet Monte Carlo is known for his wild color commentary, delighting Piston Cup fans with his humor, charisma and signature catch phrases—"Boogity, Boogity, Boogity! Let's go racin' boys!" He’s spent years on the track, in the pits and in the grease, and he’ll tell you all about it. This American Southern gentleman knows what it takes to win, and plans to bring that fervent expertise to calling the World Grand Prix."

Darrell Cartrip was selected by Miles Axlerod to host the World Grand Prix, among two others. He is still his jumpy self, and is once again the comedic announcer compared to the others.

Darrell Cartrip reappears in Cars 3, along with Bob Cutlass.

Bob Cutlass: "Welcome back to the Dinoco 400. I'm Bob Cutlass, here with my good friend, Darrell Cartrip. We're midway through what may turn out to be an historic day for racing."
Darrell Cartrip: "Bob, my oil pressure's through the roof right now. If this gets any more exciting, they're gonna have to tow me outta the booth!"
Bob Cutlass: "Right you are, Darrell. Three cars are tied for the season points lead, heading into the final race of the season. And the winner of this race, Darrell, will win the season title and the Piston Cup. Does The King, Strip Weathers, have one more victory in him before retirement?"
Darrell Cartrip: "He's been Dinoco's golden boy for years! Can he win them one last Piston Cup?"
Bob Cutlass: "And, as always, in the second place spot we find Chick Hicks. He's been chasing that tailfin his entire career."
Darrell Cartrip: "Chick thought this was his year, Bob. His chance to finally emerge from The King's shadow. But the last thing he expected was...Lightning McQueen!"
Bob Cutlass: "You know, I don't think anybody expected this. The rookie sensation came into the season unknown. But everyone knows him now."
Darrell Cartrip: "Will he be the first rookie to win a Piston Cup and land Dinoco?"
Bob Cutlass: "The legend, the runner-up, and the rookie! Three cars, one champion!"
—Darrell Cartrip and Bob Cutlass

"Boogity, boogity, boogity boys! Let's go racing!"
—Darrell as he is about to start of the tiebreaker race
Bob Cutlass:"Darrell, is pushing in the last lap legal?"
Darrell Cartrip:"No, he's not pushing him. He's just giving him a slight bump draft."
—Darrell and Bob comment on McQueen's actions helping the King.

Brent Mustangburger: "Lightning McQueen loses in the last lap to Francesco Bernoulli in the first race of the World Grand Prix. And 3 - count 'em - 3 cars flamed out leaving some to suggest that their fuel, Allinol, might be to blame."
Miles Axlerod: "Allinol is safe! Alternative fuel is safe! There is no way my fuel caused these cars to flame out!"
Darrell Cartrip: "Well, the jury may still be out on whether Allinol caused these accidents, but one thing's for sure, Lightning McQueen blew this race!"
Brent Mustangburger: "Team McQueen can't be happy right now."
—Brent Mustangburger, Darrell Cartrip, and David Hobbscap do the announcements after the race in Tokyo. 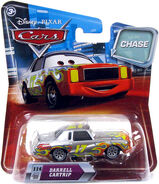 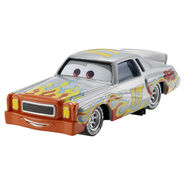