David Hobbscap is a character in Cars 2.

As a handsome forest green 1963 Jaguar Coombs Lightweight E-Type, David Hobbscap, originally from Royal Leamington Spa, England, is a worldwide racing luminary. His 30-year career in professional racing spans the globe and all types of motorsports. Now David shares that priceless knowledge as an announcer, where he’s also well known for providing comic relief during race broadcasts. A former champion with 20 starts at 24 Hours of Le Mans, his storytelling comes from personal experience. Anything but your ordinary television sportscaster, David can’t wait to enlighten and entertain the World Grand Prix audiences.

David reporting in the World Grand Prix with Darrell Cartrip and Brent Mustangburger. 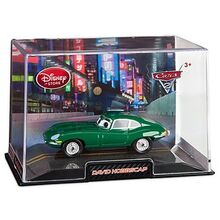 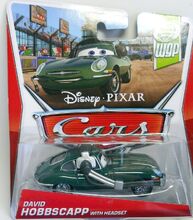 2013 diecast with headset.
Add a photo to this gallery

Retrieved from "https://pixar.fandom.com/wiki/David_Hobbscap?oldid=121513"
Community content is available under CC-BY-SA unless otherwise noted.