Day & Night is a Pixar short film released in theaters before Toy Story 3.

When Day, a sunny fellow, encounters Night, a stranger of the light, sparks fly! Day and Night are frightened and suspicious of each other at first, and quickly get off on the wrong foot. But as they discover each other's unique qualities -- and come to realize that each of them offers a different window onto the same world -- the friendship helps both to gain a new perspective.

Teddy Newton, whose previous work includes The Incredibles and Ratatouille, makes his directorial debut on the film. Unlike previous Pixar shorts, the animation style combines 2D and 3D elements, and Up production designer Don Shank says it is "unlike anything Pixar has produced before."

Fear of the unknown. They are afraid of new ideas. They are loaded with prejudices, not based upon anything in reality, but based on… if something is new, I reject it immediately because it’s frightening to me. What they do instead is just stay with the familiar. You know, to me, the most beautiful things in all the universe, are the most mysterious.

Night and Day examine each other.

Day puts Night on a Cliff.

Night likes what he sees.

Night howls with a wolf while Day shows off a pool party,

Night admiring a folly of planes.

The beauty of Las Vegas at night.

A diagram showing how Pixar created the 3D effect. 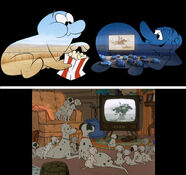 Day and Night and 101 Dalmatians watching the same show.

The ocean in Day and Night. 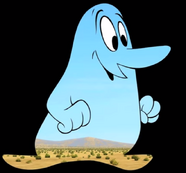 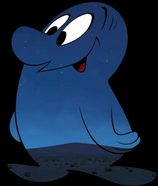