Cars 2
Denise Beam is a character from Cars 2.

Denise Beam is one of the many audience members in the World Grand Prix, and is a huge Carla Veloso fan. 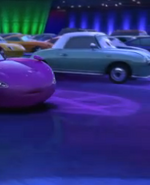 There must be two.
Community content is available under CC-BY-SA unless otherwise noted.
Advertisement