Dexter Hoover is a minor character in Cars.

"As a youngster Dex dreamed of being a real race car. A 4-cylinder compact pickup isn't exactly designed for the racetrack, but Dex found a way to put himself in the middle of his favorite sport. He climbed the ranks from selling pennant flags in the stands to top flagman on the circuit. His unorthodox caution flag pattern is a thing of beauty, and if it weren't for Dex, the races would never start -- and they'd never end."[1]

In the film, Dexter is first seen at the Motor Speedway of the South, waving his flags for the racers. He later appears at the Los Angeles International Speedway, waving the flags in the tie-breaker race.

Dexter's Car Finder profile
Add a photo to this gallery 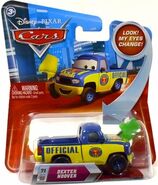 Lenticular die-cast (with green flag).
Add a photo to this gallery

Retrieved from "https://pixar.fandom.com/wiki/Dexter_Hoover?oldid=211648"
Community content is available under CC-BY-SA unless otherwise noted.