Cars
Cars 3
Dirkson D'Agostino races for the team "Trunk Fresh" in the movies Cars and Cars 3.

"Dirkson D'Agostino discovered his natural racing talent while working in the graphics department for a small racing outfit. Running errands between buildings, he dodged all kinds of obstacles at insane speeds. One day Dirkson caught the eye of the race shop's owner, who fired the young upstart for what he considered reckless driving in the workplace, and rehired him as one of his pro racers, for what he considered a natural talent on the race track."[1]

Dirkson competes in the 2016 Piston Cup season, competing against the next-generation racers. 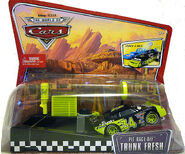 Pit Race-Off die-cast
Add a photo to this gallery

Retrieved from "https://pixar.fandom.com/wiki/Dirkson_D%27Agostino?oldid=227717"
Community content is available under CC-BY-SA unless otherwise noted.