Joy, Sadness, Fear and Anger (but sometimes Disgust has a crush on Anger)

"This is Disgust. She basically keeps Riley from being poisoned—physically and socially."
—Joy, opening narration

Disgust is a character in Inside Out. She is the green Emotion and one of the five Emotions inside the mind of Riley, along with Joy, Fear, Anger, and Sadness.

Mindy Kaling describes her as follows: "Disgust is very protective of Riley. She has high expectations for everyone around her and isn’t very patient. Disgust is also very put-together because appearances matter to her."[1]

"Disgust is highly opinionated, extremely honest and prevents Riley from getting poisoned — both physically and socially. She keeps a careful eye on the people, places and things that Riley comes into contact with — whether that’s broccoli or last year’s fashion trend. Disgust always has the best of intentions and refuses to lower her standards."[2]

Like the other Emotions, Disgust remained fairly infrequent during Riley's childhood as Joy prevailed. Despite having strong opinions of her own, she trusts Joy to know what to do for Riley, just like the other Emotions. But when Riley's family moves to San Francisco, they enter an unfamiliar world and Disgust, along with Fear and Anger, is suddenly much more present in Riley's life. She criticizes the bad shape of their new house, the smell, the dirt, the presence of a dead mouse, and the misery of their situation.

When Joy and Sadness along with all the core memories are lost into the mind, Disgust, Fear, and Anger are left to themselves as the only emotions in Headquarters. Disgust expresses serious doubts that they can keep Riley happy without Joy, when Fear proposes such a plan.

After Goofball Island is lost, Disgust tries to avoid more damage being made, but she keeps giving up quickly, reacting to the many bad turns that Riley's life is taking and being annoyed by Fear's antics. She seems to find Anger react with too much violence, but nevertheless tends to agree with him. When Anger proposes that Riley runs away, Disgust is at first reluctant to accept, but ends up approving. However, they realize how terrible the idea was when Riley becomes completely insensitive to their commands as a result.

When Joy and Sadness reach back to Headquarters, Disgust provokes Anger so he gets mad and uses him as a blowtorch to make a hole in the window and let Joy and Sadness in.

Sometime later, as Riley turns 12, Disgust is ecstatic to see that Riley has formed a Fashion Island. She is now taking care of determining what feelings Riley can show. After the console is upgraded, Disgust makes a remark about a big red alarm light on her side of it, the "Puberty" alarm ("what's pew-ber-tee?").

Disgust is very stubborn, honest, easily upset, and annoyed, as well as sarcastic, superficial, cynical, vain, and impatient. She sometimes gets her way and is obsessed with indifference. She also seizes the moment and keeps careful about people, places, and things that come into contact with Riley's eye. If that is broccoli or fashion trend last year, Disgust always has the best of intentions and refuses to lower its standards.

Disgust is slim, but has a large head and is dressed like a cool girl. She has light green skin, green long hair reaching to the shoulders, green long eyelashes, emerald green eyes, pink eye shadow, and painted orchid colored lips. She wears a pink scarf tied around her neck, a spring green dress without sleeves, a mint green belt with a buckle, forest green tight pants and pink ballet slippers. She emits a very weak green light that is impossible to see. 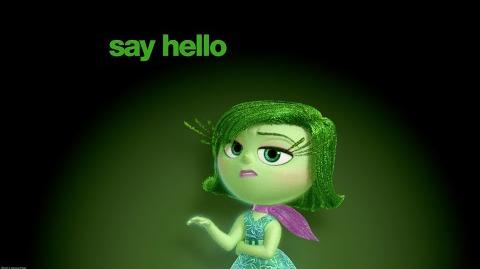 Meet Disgust - Inside Out 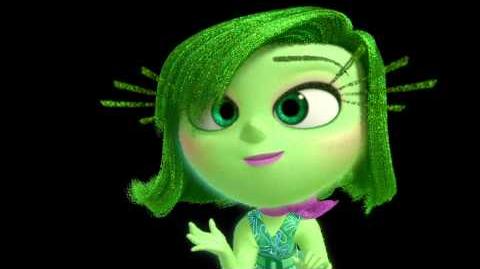 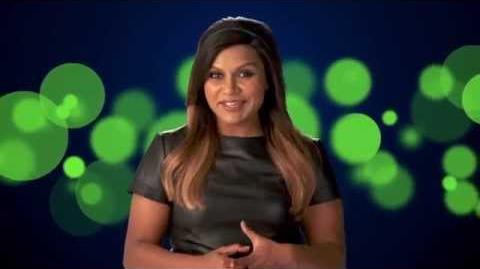 Meet Mindy Kaling as Disgust in INSIDE OUT 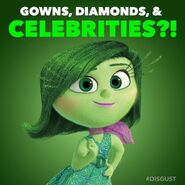 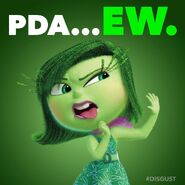 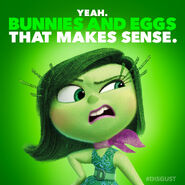 Slightly different design of Disgust as shown at D23 Expo 2013 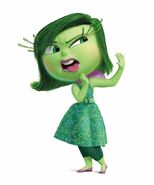 Banner ad seen inside a BART station during the film's first week of Disgust and Fear.

Art of Disgust posted by Mindy Kaling on her official Instagram 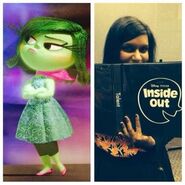 Mindy Kaling, the voice of Disgust, holding the script for the film at a recording session. 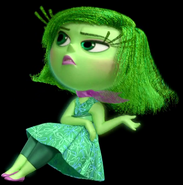 Anger, Disgust, Joy, Fear, and Sadness in Riley's mind in the Inside Out teaser trailer 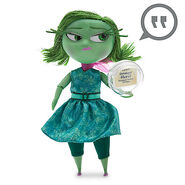 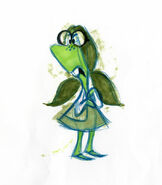