Dolly: "Wow, cowboy. You just jump right in don't you? I'm Dolly."
Woody: "Woody."
Dolly: "Woody? You're gonna stick with that? Well now's the time to change it, you know, new room and all. That's coming from a doll named Dolly."
―Dolly introduces herself to Woody[src]

Dolly is a character in Toy Story 3, Toy Story Toons, and Toy Story 4. She is one of the toys owned by Bonnie Anderson.

Dolly is a soft dress-up rag doll with purple hair, googly eyes and gently blushing cheeks. She also comes with her own templates for creating and sewing different outfits. She is about 8.25 inches tall. She first appears on top of a shelf in Bonnie's room, where Bonnie calls her "the evil witch" and plays with her.

When Dolly learns Woody's name, she asks if he's gonna "stick with that." She is shown to be sassy and is apparently the brains of Bonnie's toys, as she is the only one smart enough to not misread Andy's name when Woody holds his boot upside down.

In the end credits, she shows the toys drawings Bonnie has made for all of her toys, including the ones handed to her from Andy, and tells Chuckles the Clown that Bonnie got his smile right, making Chuckles smile for the first time ever since.

In the first episode, Dolly is first seen when Woody announces Bonnie has gone on vacation for winter break for the week. She along with the other toys begin their week of relaxation, until Barbie and Ken arrive unexpectedly thinking they have landed in Hawaii. Dolly joins the rest of Bonnie's toys as they recreate Hawaii for the pair. She is seen playing gin along with some of the other toys. Dolly is seen performing a hula dance with Woody and Mr. Pricklepants for Barbie and Ken, while they are having their "dinner."

So far, this is the only Toy Story Toons episode to have Dolly speaking.

Dolly appears again in the second short, but doesn't speak. Dolly and her friends are very surprised to see a miniature Buzz Lightyear return home with Rex. 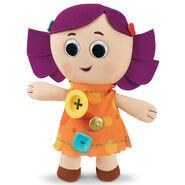 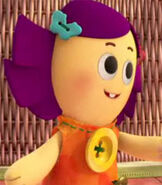 Dolly introduces herself to Woody.

"You came from Sunnyside?"

Dolly with Woody and Mr. Pricklepants performing a hula dance for Barbie and Ken.

Dolly promo poster
Add a photo to this gallery
Retrieved from "https://pixar.fandom.com/wiki/Dolly?oldid=198479"
Community content is available under CC-BY-SA unless otherwise noted.