Role in the film

When she first meets Joe, she doesn't take kindly to him being a school band teacher but welcomes him onstage. When she hears him play, she is impressed and tells him to get dressed for the performance. After Joe got separated from his body and ended up in the body of a cat named Mr. Mittens while 22 was in his body, they go for a taxi where Dorothea was in. She freaks out at the sight of Joe in a hospital gown and watches 22 (in Joe's body) leave with with Joe (who was in Mr. Mittens' body). After Joe returned to his own body, Dorothea puts make-up and becomes dismayed at Joe breaking into her dressing room. She treats him harshly due to the earlier incident, but Joe stands up for himself saying that "nothing is going to stop [him]". She calls him arrogant and decides to let him play. She compliments his suit before leaving. After the performance, she reveals that they would do it again every night. Upon seeing Joe disappointment, she asks him what's wrong. After hearing he hoped for more, she tells him about a fish that wanted the ocean, but all he saw was water. She leaves afterwards for the remainder of the film. 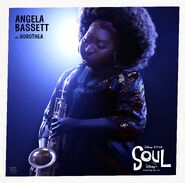 Retrieved from "https://pixar.fandom.com/wiki/Dorothea_Williams?oldid=229963"
Community content is available under CC-BY-SA unless otherwise noted.