Dot is one of the major characters of A Bug's Life.

She is the younger princess ant of the royal family and Princess Atta's little sister. She idolizes Flik and hates being small. She compliments Flik's ideas and helps and convinces him a number of times during the film. Dot fears the demented grasshopper Thumper, whom Hopper uses as a punishment. However, she eventually conquers her fear of Thumper when she smacks him on the face and has Dim scare him away.

Dot struggles to fly at the beginning of the film, because of her small size, and is forbidden by Atta and her mother from attempting to fly before she gets bigger and her wings will grow in. She later follows Flik after he is dismissed by Atta, commenting on how she likes his inventions, but unable to fly yet. Flik then shows Dot a small rock and makes her pretend it is a seed. After the grasshoppers arrive to find their food gone, Dot is captured by Hopper who plans to feed her to Thumper, prompting Flik to try to make Hopper release her, but backs away in fear. When Flik is to leave Ant Island to go to the city, Dot wishes him good luck, hoping that Flik will come back in one piece. She is later seen sitting on a cloverleaf, using Flik's telescope to look for him, despite two of her friends poking fun at her. She then spots Flik returning with the newly-recruited "warrior bugs," who are actually a troupe of circus bugs recently fired by their ringmaster P.T. Flea, and rushes over to welcome him back.

When Flik follows the circus bugs across the stream, Dot follows him, but becomes stuck in the air when she accidentally takes a dandelion puff. At the same time, Flik and the circus bugs are trying to escape a hungry finch, who wants to eat them. The bird spots the helpless Dot and charges toward her, prompting her to let go of the dandelion puff. She then starts free-falling due to still being unable to fly, but Francis catches sight of her and flies over to catch her in his arms, but the force of impact causes the two to fall into a gap in the riverbed, where Francis's leg gets smashed by a rock. The bird pecks at the gap, trying to catch Dot and/or Francis. As Heimlich lures the bird away, Flik uses Rosie's thread to scoop up Dot and Francis. After Flik, Dot, and the circus bugs fly to safety, the ants applaud the circus bugs for their bravery in rescuing Dot from the vicious bird. Dot and the Blueberries decide to make Francis as their "den mother." When P.T. Flea later arrives looking for his troupe, claiming that the Flaming Death act was a success and blowing Flik's cover, Flik and the circus bugs are banished by Atta. Dot tries to reach Flik; however, her mother kindly but boldly stops her. She then calls out to Flik sadly as he trudges off.

After Hopper's gang usurp Ant Island, Dot goes into hiding with the Blueberries. Upon hearing that Hopper is planning to squish her mother after enough food has been collected, she decides to go out to get help. Unfortunately, she accidentally bumps into Thumper, who viciously chases her until he knocks her off the cliff. Before Dot can know it, her wings finally sprout out and she becomes able to fly. She then flies through the air until she catches up with Flik and the circus bugs, and tries to convince Flik to go back to Ant Island, telling him that Hopper is going to kill her mother if he doesn't do something. However, Flik does not want to go back, ashamed of all the troubles he has caused for the colony. Dot then retrieves a stone and shows it to Flik, reciting the exact words he has told her at the beginning of the film, "Pretend this is a seed," gradually turning Flik's depression into determination.

Once they return, Flik and Dot gather the Blueberries, and they all climb aboard Flik's makeshift bird and commandeer it, with Dot giving instructions and making bird sounds. However, the bird is set on fire by P.T. Flea, and Hopper discovers that he has been tricked. Dot is captured by Hopper again, but Flik orders Hopper to leave not only Dot, but Atta and the Blueberry Scouts as well alone, confessing to Hopper that the bird is his idea. When the ants rebel against the grasshoppers, Thumper confronts Dot again, but she slaps him and says, "No! Bad grasshopper, bad grasshopper! Go home!" giving an assumption that she has overcome her fear of Thumper. Just then, Dim lands behind her and gives out an ear splitting roar to scare away Thumper, and he and Dot high-five each other.

At the conclusion of the film, Dot and the blueberries are seen crying as their "den mother," Francis, must leave with the circus troupe. Dot receives Atta's tiara when Atta is made the new Queen. As Flik waves good-bye to the departing circus troupe, Dot and Atta take him to a tree root for a better view. 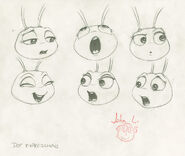 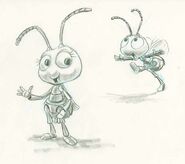 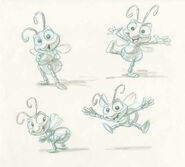 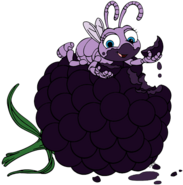 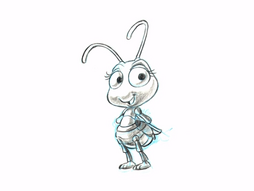 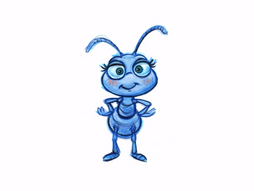 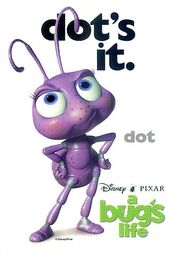 "Not until my wings grow in." 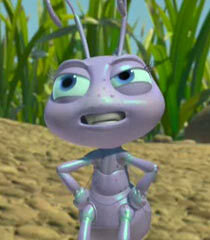 Dot noticing Thumper coming for her

Dot hiding behind the Queen

Dot waiting for Flik to return

"We drew one of you dying because our teacher said it would be more dramatic."

Dot watches Flik take off after the Circus Bugs

Dot finally gets the princess crown

"Stay here," she says to the Blueberries. "I'm gonna get help."