"Dynaguy! It actually fit together. I thought it had a good ring to it, so I started saying it to myself—it was like dynamite and dynamic and dynamo and dinosaur, they all sort of meant big and powerful, they really sounded dynamic which...you put them together and you get me!""
—Dynaguy in his NSA file

Dynaguy was a character in The Incredibles.

Early in his Super career, he came up with his superhero name while eating in a diner by putting "diner" and "guy" together, creating Dynaguy.

Dynaguy was the original leader of the Thrilling Three, which also included Phylange and Apogee.

He was apparently friends with Mr. Incredible (whom was a fan of his) and Elastigirl, as he appears at their wedding alongside Gazerbeam, Stratogale, Meta Man, Thunderhead, Rick Dicker and Edna Mode.

He was one of the first Supers sued after Mr. Incredible, due to "public endangerment." It is assumed, he died of a suit malfunction when his cape snagged the ground during one of his takeoffs, breaking his neck; although never confirmed in the film canon. He was replaced in the Thrilling Three by Gazerbeam.

Much like in the original film, Dynaguy isn't seen physically, but he makes a non-physical cameo during one of Winston Deavor's flashbacks. In said flashback, Winston reveals that his father financed a statue of Dynaguy to be erected in Dynaguy's memory after his death.

Dynaguy had the ability to shoot disintegration rays from his forehead, which would disrupt the atomic forces among atoms. This had a limited range of five meters. Additionally, he could achieve flight through ion propulsion gauntlents which were worn on his forearms.

Dynaguy was known for being impulsive and reckless, being put under an NSA meditation regimen as a result. 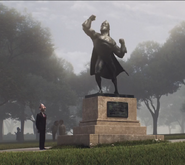