In the song "When She Loved Me", Jessie tells Woody that she too once had an owner, named Emily, who was presumably a fan of Woody's Roundup. Emily was brought up by Jessie when Woody had tried to explain to her that Andy is someone very important to him, as she knew what he was going to say to her.

In a flashback, Jessie is first shown sitting on a bed as Emily, first seen as a young girl, puts on her cowgirl hat and takes Jessie on a ride on her toy horse, then takes her out on a drive to a tire swing hanging from a tree on top of a hill, where Emily swings her around. Emily then spins around with her some more, falling into a pile of leaves. Then the scene cuts to Jessie back on Emily's bed, leaning against a pillow. Emily takes the pillow, causing Jessie to fall under the bed, and she watches in despair as Emily, throughout the years, finds more grown-up activities to do (horses and cowgirl-themed toys are being replaced by make-up and music, as well as Emily talking with her friends in person or on the telephone). At the same time, it is easy to tell that Emily is growing up as well. The scenes also suggest the 1950s, when westerns were popular, then progresses into the 1960s as colorful acid rock posters adorn her room. Another reference to the 60s is seen when a teenage Emily is seen wearing flare-legged trousers.

As the years pass, the underside of Emily's bed becomes littered with her old, childhood toys and they even carry a coat of dust to show their untouched status, along with Jessie. Just as she feels like she has been forgotten, Emily reaches under the bed to find her, feelings of happiness welling inside her after years of being neglected, as Emily's makeup kit had been dropped nearby, causing accessories to be rolled under there. Jessie then spends one last ride in a car with Emily, just like what once occurred when she was younger, but as she (now seen to be older as she can drive) steps out, she dumps her old toys, including Jessie, into a charity box, and Jessie watches in shock and sorrow through a hole in the box to see Emily drive away. The roots of Jessie's trauma and phobia of abandonment stems here.

Finally, Jessie concludes her story, somberly telling Woody that the toys would never forget owners like Emily or Andy, but the owners forget about them as time wore on, and tells him to just leave before he can say anything more.

As the toys believe Andy Davis has thrown them away, Jessie mentions Emily by saying, "It's Emily all over again!"

An older Emily bringing Jessie to a charity box, next to a truck, at the park they used to play at.

Emily picks up Jessie and Puts her cowboy hat on

Emily Plays With Jessie Under the Sheets

Emily talking to her friends in a phone (seriously, how can a phone reach that high?) 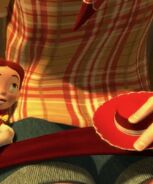 young Emily goes on a car trip with Jessie

Emily's Very Last Car Trip With Jessie
Add a photo to this gallery
Retrieved from "https://pixar.fandom.com/wiki/Emily?oldid=228109"
Community content is available under CC-BY-SA unless otherwise noted.