Before Zurg made his first appearance in Toy Story 2, he was also mentioned in the first film and some of the Toy Story Treats.

"Right now, poised at the edge of the galaxy, Emperor Zurg has been secretly building a weapon with the destructive capacity to annihilate an entire planet! I alone have information that reveals this weapon's only weakness. And you, my friend, are responsible for delaying my rendezvous with Star Command!"
—Buzz Lightyear, arguing with Woody

Although Zurg doesn't actually appear in the first Toy Story movie; he is, however, only mentioned by Buzz twice in the film. As he introduces himself to the toys, Buzz describes his "occupation" as a member of an elite universal protection unit to protect the galaxy from Zurg. Later, when Buzz and Woody argue at a gas station, Buzz mentions about Zurg building a secret weapon with enough power to destroy an entire planet. Andy also mentions Zurg when he plays with Buzz on his birthday.

Earlier in the film, Andy says "Take that, Zurg!" as he and his friends burst into his room during his birthday party.

Zurg was originally supposed to be in the first movie. However, he was deleted. An earlier version of Zurg is in one of the alternate openings for Toy Story.

Zurg is also mentioned in some Toy Story Treats.

Zurg: "So we meet again, Buzz Lightyear, for the last time!"
(Rex screams)
Rex & New Buzz: "It's Zurg!"
Rex: "Watch out! He's got an ion blaster!"
―New Buzz and the toys encounter Emperor Zurg on the elevator[src]

The first form appears during the opening scene, where he is initially seen tracking Buzz's location through his fortress inside his control room. A little later, he is seen doing battle with Buzz, in which Zurg, using his ion blaster, blasts the top half of Buzz's body into smithereens; however, the opening sequence is revealed to be only a video game, and the screen turns to Rex (who is wearing a plastic helmet) and Buzz playing the game.

Much later in the film, a Zurg toy action figure is inadvertently released by Buzz in Al's Toy Barn. Believing himself to be a real person much like Buzz did in the first film, he pursues after Buzz, intent on destroying him. He seems to have followed Buzz across the street, through an air vent of Al's apartment, and up the elevator shaft, as he is seen arriving atop the elevator when Buzz and his rescue squad of toys head back to the elevator after Al packs Woody and the Roundup gang into his case and leaves his room to head for the airport. Along with the group is a newer Buzz Lightyear action figure (also released from Al's Toy Barn by Buzz), who also believes himself to be real. Both New Buzz and Rex (a fan of the video game "Buzz Lightyear: Attack on Zurg") are caught with surprise by Zurg's unexpected arrival. A showdown occurs between the New Buzz and Zurg atop an elevator, where Zurg uses his chief weapon (which appears to be a revolving Nerf ball gun). During this battle, after overpowering the other Buzz, Zurg demands his surrender. New Buzz refuses to give up, accusing Zurg of killing his father, to which Zurg, however, claims that he is Buzz's father. As Zurg sets his gun to its highest level and is about to finish New Buzz off (at point-blank range), Rex, not bearing to watch the duel anymore, turns away, but his large thick tail accidentally hits Zurg and knocks him off the elevator and down the shaft. While Rex finally feels excited about finally overcoming his frustration toward not being able to defeat Zurg previously, New Buzz suddenly feels forlorn about possibly losing his "father". However, Zurg seems to have survived the fall (though he presumably hit his head so hard that he lost his memory of being Buzz's enemy) as he, with one of his horns slightly bent backwards, as well as appearing to have a tooth missing, is seen playing catch and spending "quality time" with New Buzz when Andy's Buzz and his rescue squad make their way out of Al's apartment. The New Buzz describes Zurg as a "great dad" as he rushes to catch another ball fired by Zurg.

Zurg is mentioned by a brainwashed Buzz Lightyear (after Lotso reset him to Demo Mode) as he sees Andy's toys as minions of Zurg. At the end of Toy Story 3, Zurg is mentioned briefly by Andy when he gives Buzz to Bonnie Anderson.

Zurg himself makes a brief appearance in the end credits, where he is shown being donated to Sunnyside Daycare in a box along with a dinosaur, a giraffe plush, and two Fisher-Price Little People. He is helped down to the floor by Stretch and meets Barbie and Ken, who welcome him to a now cool and groovy Sunnyside, of which the two are leaders. He is missing his ion blaster. He is later seen doing the robot dance during a disco in the Butterfly Room.

It was revealed on Lee Unkrich's now defunct Formspring that this was a different Zurg than the one in Toy Story 2. 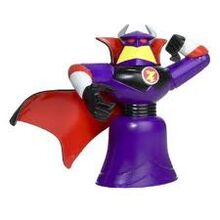 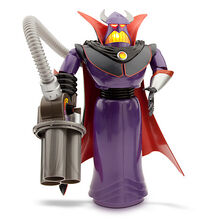 Rex: "Buzz, you could have defeated Zurg all along! You just need to believe in yourself!"
(Rex gasps as Zurg aims his ion blaster at New Buzz's head)
Zurg: "Prepare to die!"
Rex: "I can't look!" (Rex turns away, his tail knocks Zurg down the elevator shaft) "I did it. I finally defeated Zurg!"
New Buzz: "Father..."
―Rex defeats Zurg by accident[src] 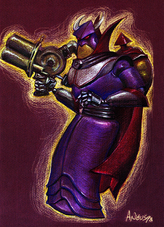 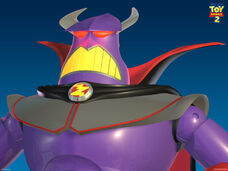 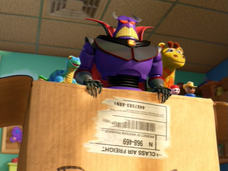 In a donated box 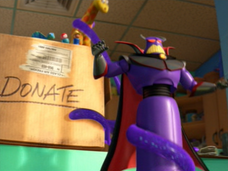 Brought down by Stretch 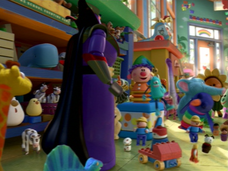 A mini version of Zurg in Small Fry 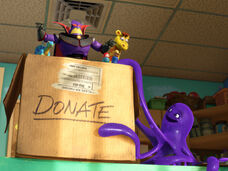 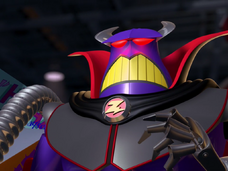 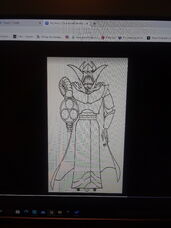 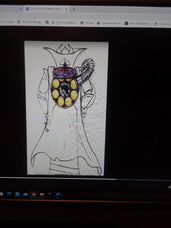 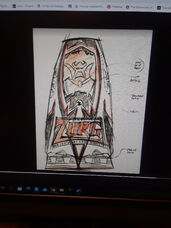 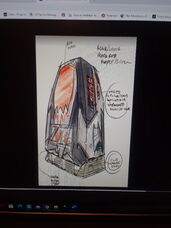 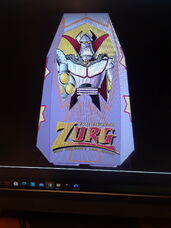