Toy Story
Toy Story 2
Toy Story 3 (cameo in flashbacks)
The Etch A Sketch (or simply known as Etch) is a magic screen art pad made by the Ohio Art company. It is one of Andy's toys in Toy Story and Toy Story 2, where it plays a supporting role in both films.

Etch is a red 1970's Etch–a–Sketch pad. It is one of Andy's many toys. Etch is able to draw quickly and, not surprisingly, very well. Such sketches include guns, portraits of Buzz, Woody and Al, Hangman nooses, and even semi-complicated maps. This is its only way of communication as it is unable to talk. Etch's way of moving around is by waddling, like Mr. Spell and See 'n Say do. Etch usually lives in Andy's toy box, but on rare occasions it can also be seen living on top of Andy's bookshelf.

"Hey, Etch. Draw!" (Etch draws a gun at a rapid pace, and makes a ding) "Oh! Got me again. Etch, you've been working on that draw. Fastest knobs in the west."
—Woody, as he plays with Etch

Etch was shown to be good friends with Woody in the beginning of Toy Story, frequently engaging in quick gun duels with him. Woody described Etch as having the "fastest knobs in the west." Etch appears at the staff meeting before Andy's birthday party in shock that his party was moved to that day, even though Andy's birthday was not until the following week. Woody explained to all the toys that Andy's mother wanted to have the party before they move to their new house.

When Hamm alerted the toys that the birthday guests had arrived, Etch, along with basically every other toy except Woody, ran to the window to see what kind of sized presents his friends were bringing, in fear that Andy might get bigger toys and that they would all be given away. Etch also watched in amazement when Buzz flew around the bedroom on Andy's model plane, not knowing that the plane was keeping Buzz in the air.

After Buzz was introduced, Etch took a liking to him like the rest of Andy's toys. When Woody saw it making a drawing of Buzz, he immediately shook Etch up to erase it and then threw him aside. Later, when Woody got in trouble for accidentally knocking Buzz out of a bedroom window, Mr. Potato Head had Etch draw a hangman noose and threatened to hang him. This proved possible that Etch was one of the many toys that went against Woody and saw it as guilty for knocking Buzz out of the window.

During the middle of the film, Etch did not appear very often, as it was shown that it was packed away in moving boxes along with RC, Sarge and the Green Army Men. However, when Woody attempted to save Buzz with RC, Etch attacked him, along with all the others, and proceeded to throw Woody out of the moving van, after thinking that Woody was trying to "murder" RC by kicking him out of the van.

At the end of the film, it is seen celebrating with the toys and listening to Sarge, on what presents Andy had got for Christmas.

"Etch, draw that man in a chicken suit."
—Buzz Lightyear, during a Crime Scene Investigation

When Woody was stolen, Etch helped Buzz, Hamm and the others by drawing Woody's kidnapper. At first, the toys struggled in figuring out who the thief was and had Etch draw several men who are possible suspects. However, after Buzz figured out the abbreviated letters on the man's license plate, Etch, told by Buzz, drew the man, revealing it to be Al McWhiggin of Al's Toy Barn, upon its own and everyone else's shock. When Rex and the other toys surfed through television channels to find the location of the store, Etch was seen watching with them, and then drew a very elaborate map on how to get there when it appeared on the screen.

After the toys returned home from their mission, they stood on Andy's bed to await his arrival back home. They used Etch, who drew a message "Welcome home, Andy," to welcome Andy back home. Etch last appeared one more time at the end of the film when the toys listened to Wheezy sing "You've Got a Friend in Me", using Mike the Microphone as a karaoke machine.

Etch appeared briefly at the opening of Toy Story 3 in the home videos. It was revealed by Woody that it was sold over the time span between the second and third film, along with Wheezy and Bo Peep 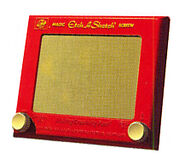 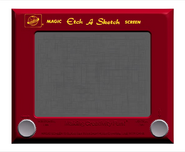 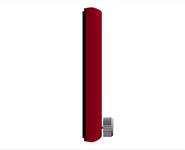 Etch helping the toys during the crime scene in Toy Story 2.

Etch in Toy Story 3, seen on a "Guess Who?" board game during the series of old home videos.