Cars
Eugene Carbureski races for the team "Tank Coat" in the movie Cars.

"Eugene got his start prepping racecars at a local race shop. But it didn't take long before he realized he had more nuts and bolts knowledge of racing than most of the other arrogant cars he was working on. A pick up race during lunch one day between Eugene and one of the pros showed that he had more power than he knew what to do with. With that one simple victory, Eugene garnered the attention of Wells Runabout, the owner of Team Tank Coat, and the rest is history!"[1] 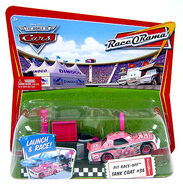 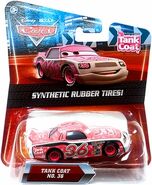 Retrieved from "https://pixar.fandom.com/wiki/Eugene_Carbureski?oldid=230999"
Community content is available under CC-BY-SA unless otherwise noted.