Catherine Keener
Evelyn Deavor is the main antagonist in Incredibles 2. She is Winston Deavor's sister and the second-in-command of Devtech. She manipulates a pizza guy, who was given the nickname “Screenslaver”, to do her dirty work and make himself look bad. She is revealed to be the true Screenslaver near the climax of the film, and is subsequently arrested.

Evelyn is first seen arriving late to a meeting between her brother, Winston Deavor, and the supers Frozone, Elastigirl, and Mr. Incredible. Almost instantly she displays a tense relationship with her brother, often disagreeing with his view of their parents' relationship with supers, often citing that their parents' death was caused by their father's obsessive fascination with supers. Nonetheless, she still goes along with Winston's plan to legalize supers.

Evelyn and Winston task Elastigirl with beginning a crime-fighting in New Urbem to eliminate the rampant crime in the city. During this time Elastigirl manages to save a runaway hover train while also learning of a new threat, the Screenslaver.

After Elastigirl saves an ambassador from an assassination attempt by the Screenslaver, both Evelyn and Winston host a party attended by many aspiring Supers. During the party Evelyn talks about her role in the company, often living in Winston's shadow and showing jealousy towards her brother. During their conversation, Elastigirl agrees that to run a successful company, selling is a product that is more important than the product itself. During their conversation, Elastigirl comes to a sudden realization that the Screenslaver can be tracked. Evelyn then sets out to make a device to locate the Screenslaver.

The following night Elastigirl attracts Screenslaver's attention by doing a phone interview with a prominent talk show host. As predicted the Screenslaver hijacks the show and begins broadcasting. Using the device Elastigirl tracks Screenslaver to a small apartment. Inside she uncovers a treasure trove of evidence including a strange set of goggles. While examining them Elastigirl is attacked by the Screenslaver. Though gaining the upper hand at first, the Screenslaver is eventually outmatched by Elastigirl. Despite his attempts to flee and destroying his apartment, he is caught and arrested. However, while being arrested, the unmasked Screenslaver displays visible confusion and claims to have no idea what he has done, and despite his protests, he is still taken into custody.

Elastigirl is thrown a party for the arrest of Screenslaver though she is convinced there is more to be discovered, unconvinced that a simple pizza delivery man would be able to pull off the crimes he committed. Reviewing evidence with Evelyn, Elastigirl notices that a screen in the apartment was displaying footage from her camera. Something that should have been impossible without inside knowledge of the Cameras. Examining Screenslaver's mask, Elastigirl finds a pair of mind control goggles inside the mask revealing that the man caught was simply a puppet. Evelyn reveals her true colors and that she is the true Screenslaver and mastermind behind the Screenslaver and forces the goggles on Elastigirl.

When Elastigirl awakens in a low-temperature chamber that prevents her from using her powers, Evelyn reveals that she wants to discredit supers by taking control of them and commit crimes to change public perception of them and ensure that they are outlawed forever, believing that supers are making regular people weak and dependent on them to save them rather than relying on themselves, including her father. Evelyn then calls Mr. Incredible telling him that there is something wrong with Elastigirl. Mr. Incredible arrives and attempts to snap Elastigirl out of her mind control but fails to and has a pair of goggles forced onto him, putting him under Evelyn's control.

Evelyn then sends a squad of hypnotized supers to the Parr residence to hypnotize Frozone, Dash, and Violet. The Supers, however, only manage to take control of the Frozone and the Parr children to escape.

Winston Deavor hosts signing of the legalization of supers with a large number of diplomats and supers on his massive yacht. Winston, however, encourages the group to take a photo to commemorate the event. When the group poses for the shot, Evelyn activates a massive monitor that puts everyone in a hypnotized state. Mr. Incredible, Elastigirl, and Frozone step forward declaring that they fight for themselves and no longer serve the public. The trio heads to the bridge and knocks out the crew before steering the ship towards New Urbem and destroying the controls. Violet, Dash, and Jack-Jack arrive and manage to destroy the goggles controlling Elastigirl, who in turn destroys Frozone's and Mr. Incredible's goggles. The group then free the other supers Evelyn has brainwashed. Mr. Incredible and Frozone then attempt to steer the ship by damaging its rudder. Evelyn realizes what is going on and attempts to make her escape on a jet. Elastigirl with the help of Voyd manages to get on the jet. Elastigirl attempts to apprehend Evelyn though Evelyn lowers the oxygen in the jet to attempt to kill her. Elastigirl uses a flare gun and damages the oxygen tank on Evelyn's back which launches her out of the jet. Elastigirl escapes the jet and saves Evelyn to her dismay, declaring that it doesn't change anything and she still hates supers. Evelyn is then arrested and presumably sent to prison.

Evelyn's personality can best be summarized as sociopathic. She has no problems with attempting to murder countless innocents to further her own goals. At one point blowing up an entire apartment floor to simply hide evidence or attempting to crash a train filled with innocents into a station also filled with countless civilians or in her most horrendous attempt at mass murder, crashing a yacht into a city in an attempt to kill numerous foreign delegates and supers and her own brother.

Evelyn is an incredibly gifted genius. Mastering the art of mind control and hacking. Her mind control technology was capable of making even some of the strongest willed people into mere shells of their former selves capable of committing acts of terror. She also displayed immense hacking skills by hijacking a talk show broadcast multiple times and taking control of a train, and multiple helicopter electronics within a short time period.

Evelyn was deeply affected by her father's murder. All of the acts she committed was so Supers would be outlawed for good. In her eyes, Supers are a barrier that prevents regular people from depending on themselves to solve their problems. She doesn't see regular people as being weak themselves only being weak for depending on Supers, because of this she views her mother favorably for her attempts to save herself and her husband by fleeing to a panic room as opposed to calling for supers. In her mind, Supers are a security blanket, that dissuades humanity from taking responsibility for their own safety. The fact her parents discarded common sense solutions and practical safeguards (such as buying a gun or retreating to a safe location); while she loves her father, she hates the fact they depend on masked strangers for their personal safety.

Evelyn is also a dependent of her own right. While she views her brother as an immature child who along with Supers enable society from reaching their own goals, she secretly resents her brother's superior interpersonal skills; needing him to sell her inventions. Despite her genius, she's stressed out, workaholic and sleep deprived (as seen by the cycles under her eyes and coffee drinking) with no personal skills. While she is the "brains" of Devtech, she would fail if not for her brother to wine and dine her technologies to interested parties.

Evelyn is tall and slender. Her hair is brown and short and resembles Elastigirl's, except unlike Elastigirl, she does not keep it neat and tidy. Her eyes are blue and she is usually seen in casual clothing, usually consisting of grey, white and black outfits. She also wears brown boots. 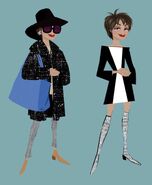 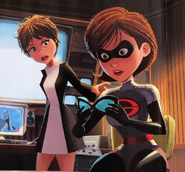 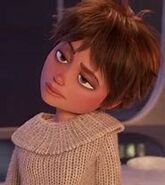 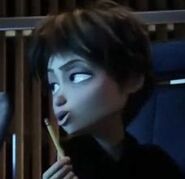