Everseer is a character in The Incredibles.

At some point in his crimefighting career, Everseer took Macroburst under his wing as a sidekick and nicknamed him "The Kid."

After or perhaps during Macroburst's apprenticeship, Everseer became the leader of the Super group The Phantasmics which also included Gazerbeam, Plasmabolt, Psycwave and Macroburst. He and Gazerbeam had a continued rivalry and they never saw "eye to eye," leading to Gazerbeam's departure from the group.

He was one of the Supers targeted by Syndrome for Operation Kronos. He was killed by the Omnidroid v.X1 during its training sessions.

Everseer's super powers included telepathy, clairvoyance, and "magnoscopic vision" (microscopic and telescopic vision). In the Boom! Comics he is shown to be able to predict events ten years ahead of time, though this ability is also mentioned to be "imperfect". His NSA file gives his intelligence at the maximum, while strength, agility, and indestructibility are given the lowest possible ratings. The Operation Kronos database assigned him a threat rating of 3.2.

He was known for being obsessive-compulsive and a germaphobic, causing him to be unmarried as he preferred to avoid physical contact. Everseer also avoided fighting criminals physically, preferring mental warfare as to prevent him having to touch "dirty" criminals. Everseer was also the author of two books titled "Shut Up! Quieting Your Inner Voice" and "Beware! Unseen Dangers of the Micriscopic World," which he wrote as part of his psychologist secret identity alongside Psycwave, whome he shared a therapist practice with. 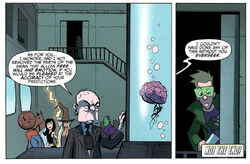 In the Boom! Studios comic, Everseer left instructions to the NSA shortly before his death to send a packet of information to Bob about a decade later, containing nostalgic entries about Stormicide and Gamma Jack. Everseer apparently foresaw his death years before the event, much to the confusion of Bob and Lucius who whilst respecting his powers of telepathy, always considered his clairvoyance to be mere superstition.

It is also revealed that when he was killed, his brain was preserved, lobotomized and utilized by Xerek to plan a more elaborate scheme against the Supers. What became of Everseer's brain is unknown, due to the cancellation of the comics. The canonity of this storyline is now doubtful due to the release of Incredibles 2.

Trivia : His Real Name is Arthur Banks
Retrieved from "https://pixar.fandom.com/wiki/Everseer?oldid=199476"
Community content is available under CC-BY-SA unless otherwise noted.