WALL•E
8668: FIL-R is a background character in WALL•E. FIL-R is a tanker truck bot aboard the Axiom. FIL-R appears from a trapdoor on the floor when the probe ship has docked in the Axiom. When FIL-R has arrived it starts immediately to fuel the probe ship. Two arm-like bots, 077 and 229, also appear from trapdoors at the same time as FIL-R does.

FIL-R just before it fuels the probe ship.

FIL-R near the probe ship after GO-4 realized that one EVE had found a plant. 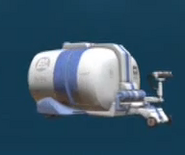 Retrieved from "https://pixar.fandom.com/wiki/FIL-R?oldid=229455"
Community content is available under CC-BY-SA unless otherwise noted.