WALL•E
BURN-E
FIX-IT or 3782 is a maintenance repair bot aboard the Axiom. Several FIX-IT units are seen on board the ship. Many are seen at the gangway. One was in the Repair Ward. Three are seen on Earth at the end of the movie. One unit is seen at the end of BURN-E. One is seen with a tray. One is also seen in the bot jam caused by WALL-E. WALL-E is also seen pasting two of these bots. Two more are seen when WALL-E sees the humans in hoverchairs. Another is seen with 4259 and 70. One is seen at a gangway with a bunch of other bots. Another one can be seen behind a 70 lookalike. One unit is seen scared of the rouge HAN-S. Another appeared stopping at a gangway. 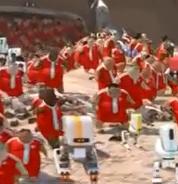 Reject FIX-IT with other Rogue Robots caught by SECUR-T

Reject FIX-IT with other Rogue Robots