Fillmore: "I'm telling you man, every third blink is slower."
(the traffic light blinks. Sarge looks at Fillmore)
Sarge: "The sixties weren't good to you, were they?"
—Fillmore and Sarge

Fillmore is a main character in Cars and Cars 2, and a supporting character in Cars 3. He is a light green 1960 Volkswagen bus with rainbows, flowers and stickers all over him. He is the owner of Fillmore's Taste-In. He makes his own organic fuel. He is a member of Lightning McQueen's pit crew.

Fillmore is an aging hippie whose heart has never really left the 1960s. Operating on flower power as well as gas, Fillmore thinks there should be more peace in the world. The only vehicle in town with tie-dye mud flaps and an interest in automotive yoga, Fillmore often spars with Sarge. Although they are different cars, really the guys are similar in character and have a lot of affection for each other.

Fillmore tries to get everybody to taste his organic fuel. He thinks it is a government conspiracy that there isn't more interest, while Sarge just thinks it's "Freak Juice."

Fillmore believes in love and distrusts all forms of authority. He has a conspiracy theory for every occasion, but especially for why the major oil companies haven't switched over to ecologically friendly organic fuel.

Fillmore built his tie-dyed geodesic dome to a 1960s design. His free-flowin' backyard is the complete opposite of his neighbor Sarge's tidy hut and garden.

Fillmore is a lover of the natural world. He lets his garden grow "naturally" and believes in recycling. he made the wind chime above his gate from old mufflers and the peace sign from one of his old tires.

"Fillmore is Radiator Springs' resident hippie. A believer in individuality and all things natural, he brews his own organic fuel and preaches its many benefits. Visitors can try Fillmore's special flavors in the tasting room behind his love-bead and tie-dye-covered geodesic dome. His many conspiracy theories and "naturally" unkempt yard drive his neighbor Sarge absolutely crazy."[2]

Fillmore is a 1960 Volkswagen bus with psychedelic symbols and liberal/environmental bumper stickers on his body (like a hippie). Fillmore is a strong advocate of natural products and makes his living by selling organic fuel behind his neon dome, painted similarly to himself. His lawn is allowed to grow free with no mowing or pruning, and he also creates his own lawn ornaments from scrap. He believes that organic, renewable fuel would be more widespread were it not for a conspiracy involving the major oil companies controlling the government and supposedly not wanting to compete with Fillmore's cheap and plentiful fuel. Fillmore is a fan of Jimi Hendrix, and plays his version of the Star Spangled Banner every morning, much to the frustration of his neighbor Sarge. Despite their differences and frequent arguing, they appear to be close friends.

Fillmore appears in the short, Mater and the Ghostlight, but does not have any lines. At the beginning, Mater pranks him by adding more cans of oil outside as Fillmore is taking them inside his tent, confusing him. Eventually, he sees an entire pile of cans, which scares him back inside his tent.

Radiator Springs’ resident hippie Fillmore is an easy-going, peace-loving 1960s Volkswagen van. And as his friend and neighbor Sarge likes to say, “once a hippie, always a hippie.” At his popular shop Fillmore's Taste-In, Fillmore brews his own fuel, which he sells with Bohemian accessories like tie-dyed mud flaps. But when he learns that the World Grand Prix will be run exclusively on the alternative fuel Allinol, Fillmore closes up shop and signs on as the fuel expert for Team Lightning McQueen.

When McQueen decides to partake in the World Grand Prix, Fillmore joins Mater, Luigi, Guido, and Sarge to be McQueen's pit crew, with Fillmore serving as the fuel expert. In the film, he is mainly seen with Sarge for most of the time, and comments on how the fuel Sarge eats in Italy is organic, much to his annoyance. Due to being a pacifist, Fillmore is not seen during the battle against the lemons in London. He does eventually rejoin his friends but gets scared when he sees British guards about to shoot McQueen and Mater (who has a bomb attached to him). In the end of the film, Fillmore reveals that, despite saying Sir Miles Axlerod's Allinol is safe during the Italy race, Sarge switches it out for his organic fuel.

Fillmore returns in Cars 3. He is voiced once again by Lloyd Sherr.[3][4] Unlike the last two films, he only serves minor roles, and while he is seen serving as McQueen's pit crew in his races at the beginning and end of the film, he does not serve any roles apart from that. Oddly, when McQueen has his big crash, Fillmore (along with Sarge) does not go over to McQueen's crash site to check on him, despite Mater, Sally, Luigi, and Guido doing so.

Fillmore appears in Cars Toons, though in most of them, he is a minor character. In Mater's Tall Tales, he usually only appears in the beginning and end, listening to Mater's tales. He does have a speaking role in the episode, Unidentified Flying Mater, though due to George Carlin's death in 2008, Fillmore uses archived voice recordings, and has only two lines: "Woah!" (when he sees the traffic light flashing multiple colors) and "Far out!" (when he sees Mater flying away at the end). The former is recycled from Cars when McQueen falls into cacti during his race with Doc Hudson. In the short, Fillmore is watching the blinking traffic light when it begins flashing multiple colors. He then sees Mater and Mator flying by him. Thinking that his drink is making him hallucinate, he pushes it off to the side while terrified. At the end, he watches Mater fly away using Mator's powers.

Fillmore also appears in Tales from Radiator Springs, and appears and speaks in all three of them (excluding Bugged, where Red is the only character), with Lloyd Sherr reprising his role from Cars 2. In Hiccups, he tries to cure McQueen's hiccups by making him drink a can of "cure," though this results in him shooting flames out of his mouth, which does not solve anything. In Spinning, he watches Guido spin a sign alongside the rest of the Radiator Springs residents. In The Radiator Springs 500½, Fillmore partakes in Stanley's Leisurely Drive alongside his friends. He dresses up to have jugs on his sides.

Fillmore is very laid-back and tends to not take a lot of things seriously (with a few exceptions however, such as when Radiator Springs became completely deserted or when McQueen and Mater were on the verge of being shot at by the British gaurds). He has a hippie personality reminiscent of the 1960s, usually saying "man" at the end of his sentences. He loves nature, and tries to persuade the world in using organic fuel rather than major oils, with this obsessions causing Sarge to call him a "treehugger" in Cars 2 (though Fillmore calls him the same thing back at the end of the film). He is not always chill however, and has been seen angry a few times, such as in Cars when he sees McQueen enter the courthouse and calls him a "fascist" for destroying the road, or in Cars 2 when Mater embarrasses himself thanks to some wasabi in Tokyo, he, along with Luigi, Guido, and Sarge, were visibly angry that Mater made himself, along with the whole team, look bad.

Fillmore as he appears in Cars 2

Fillmore in The World of Cars Online 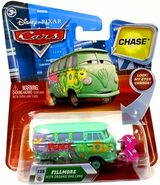 Lenticular die-cast with organic gas can 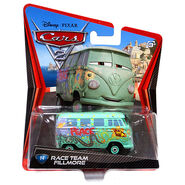 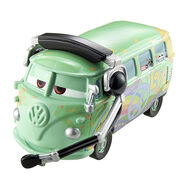