For other uses, see Flik (disambiguation)

Flik is the protagonist of A Bug's Life.

In the film, Flik is an unconventional, inventive ant who is desperate to make a difference to his colony's way of life. He is also sweet to Princess Atta and has a crush on her, but he has a tendency of making things worse for himself. He does this by accidentally eliminating the pile of food for the grasshoppers, and then causing the leader, Hopper, to double the offering that has to be completed by the end of autumn. During his trial, the royal council reprimands him with Atta sentencing Flik to dig in the tunnels for one month, but Flik suggests recruiting "bigger bugs" to help fight the grasshoppers away.

After the royal council approves his idea (assuming that Flik would not be around to cause any more trouble), Flik leaves Ant Island and ventures to the city (rubbish under a caravan), where he mistakes a recently fired circus troupe for warriors when some of them do an act based on Robin Hood. After Flik returns to Ant Island with the circus troupe, he introduces the ants to the troupe, but the troupe refuses to believe the reason Flik has recruited them and fly across the stream from the Ant Island, with Flik in pursuit. After a nearly fatal encounter with a territorial bird in which Dot, Atta's younger sister, and Francis, a cranky ladybug clown and a member of the circus troupe, are both saved by the Circus Bugs, Flik is given the privilege to speak with Atta herself, in which Atta apologizes to Flik for her misjudgement.

Learning from Atta that Hopper is horrified of birds, Flik comes up with an idea and tell the Circus Bugs that they will build a makeshift bird, controlled from the inside, to scare Hopper away, as long as they keep the idea secret from the rest of the colony. The idea goes into motion and, during the process, Flik is shown acting awkwardly around Atta and staring lovingly at her. After the bird is complete, the ants celebrate and Atta thanks Flik for finding the "warrior bugs," getting their antennas tangled. But when the circus troupe's leader, P.T. Flea, arrives at the island in search for them, Flik's mistake is made public to the colony. A displeased Atta sees Flik through his lies and regrettably has him exiled, this time for good. Downhearted, Flik departs Ant Island with the circus troupe.

However, Dot catches up with him, and tells him that Hopper, who invaded the island with his grasshoppers, plans to execute her mother, the Queen, after they have finished gathering food. The Circus Bugs suggest using the false bird, but Flik says it won't work, much to their shock, and acknowledges that the colony was right to kick him out for being such a screw-up and doesn't want to do anything, believing they will be better off without him, but when Dot brings him a rock and uses his words from the beginning from the film, Flik feels better and is motivated to return to Ant Island, where he, Dot, and the Blueberries climb aboard the "bird" and take control the model. The plan almost works, but the "bird" misdirects and crashes into the circus wagon, freeing P.T, who sees the "bird" and sets it on fire, prompting Flik to crash-land the "bird."

Hopper, realizing that he has been tricked, hires his enforcer Thumper to savagely beat Flik up when Flik admits that he is accountable for the mayhem. Despite the injuries he has sustained, in the film's turning point, Flik redeems himself by standing up to Hopper, exposes his plot to kill the Queen, and states how ants are not meant to serve grasshoppers, but are awesome creatures who are strong in number. Flik's speech astonishes every ant in the colony, including Princess Atta. Infuriated by Flik's defiance, Hopper knocks Flik down, giving the ant more injuries. Before Hopper can squish Flik, Atta rushes in to stop him, tells him to leave, and helps Flik up, commending him for his courage.

Inspired by Flik's speech, the ants and the Circus Bugs take a stand against Hopper's gang and frightens the grasshoppers away. Flik and the other ants seize Hopper and shove him into the circus cannon, but the rain falls, prompting the ants to run for it, but Flik is still wounded and collapses while he’s running. As Atta rushes over to help Flik up, a mortified and vengeful Hopper pops out of the cannon and takes Flik hostage as he flies away afterwards. The circus bugs attempt to give chase, but they are unable to do so as they end up being stuck in a tree. However, Flik is saved by Atta, who he instructs her to take him across the stream to the other side where he has previously encountered the bird. As Atta watches worriedly, Flik faces Hopper, who backs him to the bird's nest and chokes him. As the bird picks up Hopper in its beak, Atta quickly pulls Flik to safety, and they cringe as the bird lowers Hopper into the beaks of its chicks.

When spring comes, the Circus Bugs prepare to leave, and P.T. Flea asks Flik if he is sure he cannot come on a tour with them, to which Flik answers that he belongs to the island, as well as with Atta, who has since made up with him. The circus bugs thank Flik and, along with the ants, applaud at him for his heroism and brilliance. Then Atta approaches Flik and kisses him, choosing him as her mate. Then Flik rushes over to assist Heimlich, who has emerged out of a cocoon, still a caterpillar, but now with small butterfly wings, into the air. As Flik waves farewell to his friends, he is taken to a tree root by Dot and Atta for a better view.

Flik is a nerdy, inventive ant who wants to make a difference to his colony's way of life, but has a tendency to make things worse in the process. His inventions include a telescope created by wrapping a blade of grass around a dew drop; an automatic harvester; several items of traveler's gear; and the bird-shaped aircraft used to terrify the grasshoppers. He is friends with Dot and the Circus Bugs, and the Blueberries.

Flik was also very kind and caring to his friends. He is also kind, sweet, clever, joyful, adorable, fun-loving and handsome. Sometimes, Flik can be scared of Hopper, but he was more than willing to eventually stand up to him which led the other ants on a revolt to stop the grasshopper's bullying once and for all.

Flik is a tall, sky blue Argentine ant with blue eyes and a blue tongue. Like all ants, he also has two antennas, a thorax and an abdomen.

Flik appears in the show as the host. He educates the audience on why bugs shouldn't be seen as pests, but more as friends.

"Here I go. For the colony, and for the oppressed ants everywhere!"
—Flik, as he leaves Ant Island on his journey

"You're wrong, Hopper. Ants are not meant to serve grasshoppers. I've seen these ants do great things, and year after year they somehow manage to pick food for themselves *and* you. So-so who is the weaker species? Ants don't serve grasshoppers! It's you who need us! We're a lot stronger than you say we are... And you know it, don't you?"
—Flik stands up to Hopper
Crew: "And action."
Flik: "To infinity and beyond! I'm sorry, I couldn't resist. I mean, really, can you blame me?"
—Flik in an outtake, as he blurts out Buzz Lightyear's catchphrase 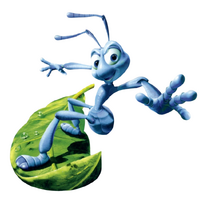 Flik explains to Dot that life is like a seed growing into a plant.

Flik realizing what he wants to do first for his plan.

Even though he has been bruised and tortured by Thumper, Flik has the courage to stand up to Hopper. 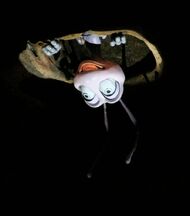 An animatronic Flik looking at the audience of It's Tough to Be a Bug! while upside down in a hole. 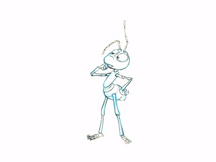 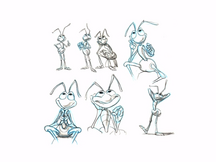 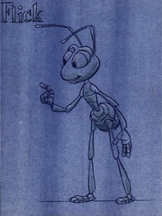 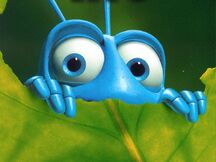 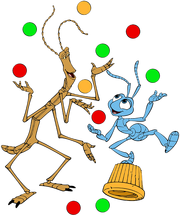 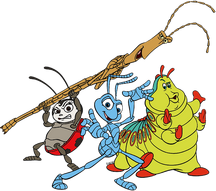 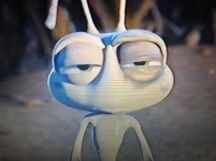