Cars
Cars 3
Floyd Mulvihill is a professional race car in the movies Cars and Cars 3. He is a sponsored by Gasprin in the Piston Cup Racing Series. He is a Stodgey Suaver EX that is painted blue and yellow, with the Gasprin logo on his hood and the number "70" painted on his hood and doors.

During the race at the Motor Speedway of the South, Floyd is passed by Lightning McQueen by using a tilt technique to squeeze through the space between Floyd and the wall. Floyd is later involved in the accident caused by Chick Hicks, during which he is hit by Slider Petrolski.

Floyd returns in Cars 3, competing in the 2016 Piston Cup Season. But when the next-generation rookie racers begin performing much better than the veteran racers, Gasprin fires Floyd and replaces him with a next-generation racer named Richie Gunzit.

The World of Cars Online

In The World of Cars Online, Floyd was one of the racers that competed against the players at the Big Heartland Speedway, along with Rusty Cornfuel and Ruby "Easy" Oaks.

"Floyd Mulvihill, originally trained as an automotive engineer, decided to put down his tools and pursue his life-long passion to race. He competed in the Junior Piston Cup Pro Series with the likes of Sage VanDerSpin and graduated to the Piston Cup in 2005. He's affectionately known as "Smoky Floyd" as he enjoys laying long patches of burning rubber in front of his adoring fans during a race in 2005." 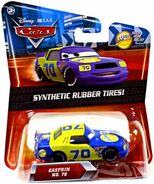 Floyd Mulvihill as he appears in Cars 3.
Add a photo to this gallery

Retrieved from "https://pixar.fandom.com/wiki/Floyd_Mulvihill?oldid=233579"
Community content is available under CC-BY-SA unless otherwise noted.