3 minutes, 21 seconds
For the Birds is a Pixar short film written and directed by Ralph Eggleston. Its worldwide debut occurred at the Annecy Film Festival in France on June 5, 2000. It would later premiere in the United States at the 27th annual Siggraph conference on July 24 of that same year, and was attached to the theatrical release of Monsters, Inc. in 2001. It was re-released on December 19, 2012 with Monsters, Inc. in 3D. The film won the Academy Award for Best Animated Short Film.

Fifteen blue-birds land one-by-one on a power line, and soon they encounter a huge and goofy-looking bird. They mimic and tease him, but he goes on the cord anyway, trying to be friendly. The little birds screech at him shrilly, and one of them Bully pecks him hard on the side causing the big bird to drop from the cord. He still manages to hang on by his toes, which two of the little blue birds Bully and Snob start pecking at grumpily in order to make him let go. The rest of the birds (including the big blue one) egg them on, until at the last second one of the little bird's spots how close to the ground they actually are. Alerting the others, they quickly try to stop the other two but it is too late.When the big bird falls off, the others are all flung away into the sky. When they come back down, we see that the little birds have all lost their feathers, making them the goofy-looking ones now. The short ends with the big bird laughing hysterically as the other birds hide behind him.

The first four small birds to land on the power line are named Bully, Chipper, Snob and Neurotic.[1]

Ralph Eggleston had this to say about his inspiration for the short: 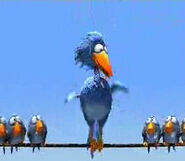