Tony Hale
Forky is a main character in Toy Story 4. He is a sentient spork created by Bonnie who initially believes he is trash, but eventually accepts his role as Bonnie's new favorite toy.

Forky is kind and pleasant, though quite naive, unaware of the danger he puts himself through. At the beginning of the film, he is certain he is not a toy, but instead belongs in the trash, even going as far as attempting to throw himself out every chance he's given. This is because the prospect of being alive in the first place made him uncomfortable, being unable to understand his purpose. Even after he starts accepting he was made to make Bonnie happy, he still refers to himself as "Bonnie's trash" until the end, as shown when he tells Karen Beverly about she is a toy instead of "trash".

Forky is a white spork with red pipe cleaner arms and a wax stick unibrow. He has mismatched googly eyes, a blue wax stick mouth, and pink blushed cheeks. He also has popsicle stick halves for feet stuck to clay, one of which has a rainbow sticker on it.

Created by Bonnie in school using a spork and some crafts, Forky quickly becomes Bonnie's most important toy. Initially Forky rejects his new role as a toy, starting by only saying "trash?" followed by constantly throwing or attempting to throw himself away, only for Woody to pull him back out or restrain him again. Eventually Forky manages to make it to the window of a moving RV, insisting that he is made for "soup, salad, maybe chili, and then the trash!" Forky then jumps out of the window, screaming "freedom!", after which Woody pursues.

Catching up with him, Forky doesn't understand why he has to be a toy. Woody tries to impress upon Forky that he will be the most important toy in "Andy's" life, before correcting himself to say Bonnie. Catching on his phrase, Forky asks who Andy is, and the two toys get into a long discussion (with Forky enthusiastically agreeing with everything Woody says) about Woody's time as a toy. Eventually bringing things back to trash as is Forky's wont, Woody asks Forky why he is so obsessed with trash. Forky explains that because it's soft and warm and is like a voice telling you that "everything's gonna be ok".

Seizing on this line of thought, Woody tells Forky that he provides that kind of assurance to Bonnie, and that for that reason he should stick around. However, Forky becomes confused, latching onto the idea that he is "Bonnie's trash", even though he nevertheless becomes enthusiastic about returning to Bonnie, running well ahead of Woody in his eagerness to return.

En route, Woody passes by an antique store with Bo Peep's lamp in it. Stalling their trip long enough to check inside to see if Bo is there, the two toys run afoul of Gabby Gabby, who tries to capture them for Woody's voice box. Using a nearby person as an opportunity to escape, pieces of Forky are ripped off and captured by Gabby Gabby's Bensons during the escape, though Woody makes it out.

After being reassembled by the Bensons, Gabby Gabby treats Forky kindly and queries him for information about Woody, which Forky freely gives into his ignorant innocence. They become good friends, with Forky helping Gabby Gabby to be proficient in tea etiquette. Woody tries to rescue Forky, but a Benson captures Forky yet again.

Finally agreeing to give Gabby Gabby his voice box, Woody asks for Forky's release as a condition, to which Gabby Gabby agrees. After the Bensons remove Woody's voice box and sew him back together, he and Forky head toward Bonnie's backpack. Before making it inside, Forky stops so that he can watch Harmony finally notice Gabby Gabby after she activated her now-functional voice box. Harmony, though she pulls Gabby Gabby's string and seems to like the doll, quickly and callously changes her mind, throwing her away without a second thought, much to Forky's shock. Woody stays behind to comfort Gabby Gabby and sends Forky ahead in the backpack to make sure the toys meet him at the carousel.

Relaying this information to the other toys, Jessie and Trixie come up with a plan to force the RV to turn around and return to the carnival. Upon arrival, after Mr. and Mrs. Anderson leave the RV, Forky is assigned to keep the door locked to prevent them entering in order for the toys to keep the RV stationary long enough to extend the awning to create a bridge between the RV and the carousel.

While Woody says an emotional goodbye to all the toys, intending to leave and travel with Bo Peep, Forky spontaneously arrives to say goodbye to Woody also. Realizing in a panic that Forky abandoned his job of keeping the door locked, the toys scramble to get off the awning and onto either the carousel or RV.

Safely back at Bonnie's House, Forky is stunned to see that Bonnie has created yet another utensil toy, a very confused Karen Beverly, to whom Forky assures he will explain everything. Karen, believing herself to be trash just like Forky did, asks "why am I alive?" to which Forky responds, "I don't know."

The name originating from Josh Cooley's daughter, the concept for Forky came about while scenarios were being imagined for Bonnie. Questions like "What if Bonnie picked up a rock and started playing with it?" and "Does a rock come to life?" brought them eventually to the idea of animating a simple spork.[1] 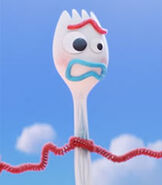 Retrieved from "https://pixar.fandom.com/wiki/Forky?oldid=229594"
Community content is available under CC-BY-SA unless otherwise noted.