Peter Sohn
Forrest Woodbush (a.k.a. the Pet Collector) is a character in The Good Dinosaur. He is a Styracosaurus (a relative of the Triceratops) carrying numerous animals on his horns.

"Forrest Woodbush is a mysterious Styracosaurus who lives in the wilderness. Like Arlo, he harbors unreasonable fears. His ability to blend into his surroundings helps—along with an unusual (but not-exactly-fierce) collection of forest critters he’s recruited to protect him."[1]

Forrest Woodbush approaches Arlo after he witnesses Spot protecting Arlo from a snake. He expresses interest in acquiring the then-unnamed Spot, declaring that if he names him, he will keep him. After much "meditation", Forrest proposes evocative names such as "killer" or "murderer" before ending with more random choices such as "Violet" or "lunatic". However, Arlo wins the contest when he yells, "Spot!" and that the human boy reacts.

Forrest Woodbush, defeated, solemnly predicts that Spot will always protect Arlo. However, he is terrified when Debbie, his favorite pet, flies away, seemingly to join Arlo. He is last seen running after her, pleading her to come back.

The collection of pets Forrest Woodbush has gathered to protect him is highly ecclectic and is composed of several reptiles, mammals, as well as a few birds and butterflies. The pets whose names are known are: 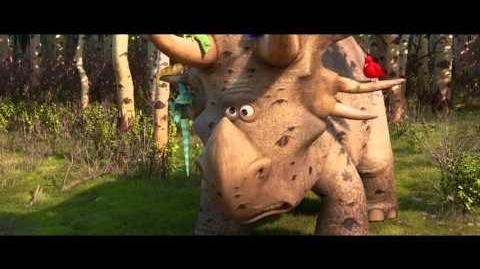 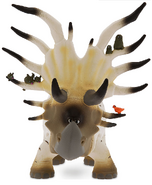 Action figure
Add a photo to this gallery

Retrieved from "https://pixar.fandom.com/wiki/Forrest_Woodbush?oldid=228131"
Community content is available under CC-BY-SA unless otherwise noted.