Francesco Bernoulli grew up in the shadow of the famous Monza race course in Italy where he and his friends would sneak onto the track and race the famous Pista di Alta Velocita bank turn. He was an instant winner on the amateur circuit and soon became an international Formula Racer champion. The ladies love Francesco’s open wheels, youngsters look up to his winning spirit and fellow racers envy his speed. But Francesco’s biggest fan is Francesco himself, as evidenced by his racing number. As the most famous race car in Europe, #1 Francesco is a favorite to win the World Grand Prix, which also makes him Lightning McQueen’s chief rival.

In the movie, he first appeared on the Mel Dorado show, when they talked about inviting Lightning McQueen to the World Grand Prix. Francesco then began insulting him. Being his best friend, Mater didn't take kindly to Francesco insulting McQueen, so he called the show, telling Francesco to stop speaking that way about Lightning. McQueen, seeing Mater on the phone, drags him out and instead deals with Francesco himself, telling him that he doesn't like his best friend being insulted either. The pair argue, ending with Lightning calling Francesco fragile because he is a Formula 1 car. He takes it as a serious insult and starts yelling in Italian when he is soon muted. Then Miles formally invites Lightning to join the World Grand Prix, to which he accepts and joins.

Later, Lightning and Mater meet Francesco at the party in Tokyo. Once they finished their conversation, Francesco shows Lightning a bumper sticker saying "Ciao McQueen", proving Francesco's arrogance. Soon after, Mater consumes some wasabi which he thinks was pistachio ice cream. Francesco laughs mockingly after Mater embarrasses McQueen and himself in front of the world when he drinks from the fountain.

At the beginning of the Tokyo race, he was announced to be good on the straight-aways. When the racers were lined up, he heard Lightning's catchphrase "I am speed!" He decided to mock McQueen again by declaring, "Francesco is triple speed." During the race, he fell behind to last place in the dirt section, but was able to catch up to 2nd place. Then when Mater was "going to meet his date," he accidentally gave Lightning some bad racing advice which was to race on the outside, and Francesco, who was shadowing McQueen, took the inside, passed McQueen and won the race, which only made their rivalry grow larger.

In the second race in Porto Corsa, Francesco hears about Lightning missing his friend Mater. Then he tells him that it's hard to be far away from home. However, Francesco was at home, and his mama was in the audience. He tells his mama that he will win the race. For most of the race, Francesco was in the lead, but then Lightning passes him and wins the race. Unfortunately, Lightning's taste of victory is promptly shattered when he notices the huge wreck on the LED screen (since nearly all the other cars used Allinol which explodes from a EMP gun). Both racers are horrified of the huge wreck of injured cars.

In the third race in London, he was at first seen in the lead, but then Lightning passes him. Then Mater, using a pair of rockets and had McQueen holding onto him, zoomed past Francesco, which makes him hope it was a bad dream. Then Holley, with her wings and afterburners, passes him, and he freaks out again.

By the Radiator Springs Grand Prix, the rivalry between the two had settled down a little, and they can be considered "friends" although they do seem to still be major rivals at times. Before the race, Sally meets him when Lightning introduces them to each other. Then Francesco sees Lightning's bumper sticker, which said "Ka-ciao, Francesco!" The race then started with Lightning in the lead (it was his home track), and Francesco following.

In Cars 2: The Video Game, Francesco is one of the ten characters that are playable from the beginning of the game. A version with a black paint job, called Midnight Francesco, can be unlocked by earning all badges and crests.

In Disney Infinity, Francesco is one of the four playable characters from the Cars franchise. His exclusive adventure is Francesco's Rush, which is a race that you need to beat in a certain time to get a gold medal. His abilities are the same as the other cars, which are drifting, and an additional square to the turbo boost meter.

During the story of the Cars Play Set, after completing the "Double Back Dash" mission, he arrives at the Radiator Springs International Race Invitational hosted by Luigi. Later, Francesco challenges the player's character to a race with trick barrels scattered around the track. After Chick Hicks says to the other racers that he is plotting to win the race and that it will be the "last time you'll be seeing my grill," Francesco states to The King that he almost likes Chick and that he would have said it better. After the player wins the race, Francesco watches as Finn McMissile plans to have Chick sent to the impound lot, and leaves with Finn, The King, Ramone and Flo as they instead take Chick away to be painted red with lightning bolts.

In Cars: Fast as Lightning, Francesco was confirmed as a playable character, although no gameplay footage has been released of him yet.

Francesco is cocky and self-centered, as proven on numerous occasions with Lightning McQueen. In Cars 2, Francesco serves as the main rival to McQueen on his part of the film, and has a rather similar persona to Chick Hicks from Cars and Jackson Storm from Cars 3. However, unlike Chick and Storm, Francesco seems to have a good side to him somewhere in his transmission; for example, like McQueen, Francesco was horrified to see the huge wreck after the Italy race, and Francesco is not a cheater, just very talented and extremely arrogant.

Retrieved from Stitch Kingdom via the Web Archive.[1]

While developing a Formula One character for the film, the developing team realized that a such open-wheeled car could make much more gesture than normal cars with fenders. Director John Lasseter said: "We don’t typically lift the tires off, partly because of the fender. But I thought, “Wow. To have an open wheel car, like Francesco, it gives us a lot more gestures.” And so we thought, “Well this guy’s going to be gesturing like crazy. Let’s make him Italian, an Italian Formula 1 car. This will be perfect.”"[2]

Bernoulli’s design took four months to be finalized as the team worked out where to put the mouth and how to give an F1 car a “windshield” for the eyes.[3] Indeed, F1 cars do not have a windshield. Additionally, they are very long. As says Character Art Director Jay Shuster, "Formula cars have long snouts, so we had to really inflate his form to get the real estate we needed."[4] Ultimately, the eyes were placed on a sort of helmet that is integrated with the body. The mouth is at the end of a foreshortened nose, and not underneath it as originally envisioned.

The fact that Francesco, as an open-wheeled car, has his suspension visible, posed some unusual problems to the animators. According to Shuster: “Francesco was the hardest design to complete because of his exposed suspension”. As supervising animator Dave Mullins said: "We always have fenders covering the wheels. So we can hide our dirty little secrets underneath the hood, because the chassis is moving around and stretching around. All you really see is the hard body of the car, and the wheels acting. With Francesco, we can see the connection between the wheels and the body. It was one of the big challenges trying to figure out how to support everything that’s going on with the body."[4]

The original suspension had to be reinvented in order to support all the stretchings that Francesco's gestures would cause, and the team had important struggles to achieve a believable suspension. Jay Shuster said: "We realized that when he takes off his front wheels, he's stretched like a rubber band and it's really ugly. Something like that took about two months to figure out what was going on—we developed a whole telescoping arm that had a pivot point."[5] “The kind of physical expression we were able to get from Francesco’s movement took a lot of work but really looked great in the end. He was able to achieve these really extreme poses.”[4]

"Women respect a car that has-a nothing to hide."
—Francesco, at the party in Japan.

"Grazie di arrivederci!" (Thank you, goodbye!)
—Francesco passing Lightning in Tokyo, after Lightning thinks Mater told him to go outside.

"What is happening?! It's a bad dream!"
—Francesco, after Mater zooms past him with his rockets.

"WHAT IS HAPPENING?!?!"
—Francesco, after Holley Shiftwell zooms past him.

Francesco on a promotional poster

A poster of Francesco

Francesco's intro in the Japan broadcast

"Really? You are speed?"

"Then Francesco is triple speed."

"It's-a really getting him into the zone!"

Francesco leading the race in Tokyo

Francesco at the post-race event

"To truly crush one's dream, you must first raise their hopes very high."

Francesco and McQueen fight for the #1 position in Italy 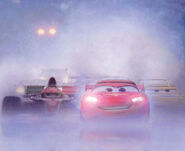 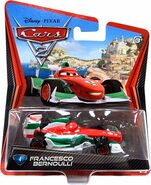 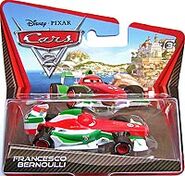 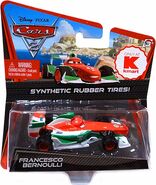 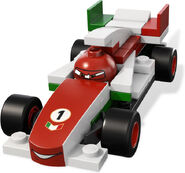 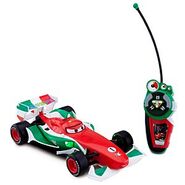 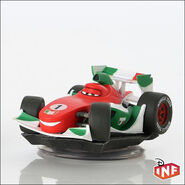