Mark "Frosty" Winterbottom is a character that appears in the Australian version of Cars 2. He is a race car that Lightning McQueen meets at the World Grand Prix welcome party.

"Frosty is the fastest race car Down Under, proudly sporting the Australian flag. This Aussie hero is as fast on the road as he is on the dirt tracks of the Australian outback. The highlight of his career so far was showing off his speed to international audiences and racing with the world elite at the World Grand Prix."[1] 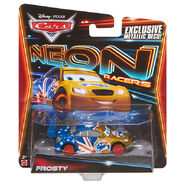 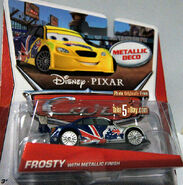 A lunch box featuring Frosty
Add a photo to this gallery

Frosty: "Check out that tow truck."
Lewis Hamilton: "Man, I wonder who that guy's with."
Lightning McQueen: "Ah... Will you guys excuse me just for one little second?"
—He notices Mater talking to Zen Master.

Retrieved from "https://pixar.fandom.com/wiki/Frosty?oldid=207600"
Community content is available under CC-BY-SA unless otherwise noted.