For other uses, see Nurse George

Sam Black (films)
Stephen Stanton (Monsters at Work)
George Sanderson is a character in Monsters, Inc. and its prequel Monsters University. He is a monster that runs afoul of the CDA's "Code 2319" (contact with a human child) several times, forcing the CDA to shave and scrub him to remove any trace of human contact.

George is the 8th best scarer on Scarefloor F at Monsters, Inc. He is a furry monster with a horn on top of his head. George is also very good friends with Mike, Sulley, and Claws Ward.

When he comes out of his door one day, he has a child's sock on his back and when his assistant, Charlie Proctor sees the sock on his back, he gasps and shouts, "2319! We have a 2319!" The CDA agents arrive and remove the sock from George's back. The agents then shave George's fur off, have him showered, and place a cone/protector around his neck.

Later on in the film, Sulley puts some of Boo's toys in George's locker which he accidentally left open, and when George opens it the next day, the toys fall on top of his head and Charlie calls again for the CDA agents who come and jump on George again to put more cones on him.

Later, when Charlie gets George a door from Nepal, Sulley bursts through after being banished and a sock falls on George's chest. Just as Charlie is about to call for the CDA again, George finally gets fed up and stuffs the sock into Charlie's mouth and throws him into the kid's door and walks away happily while whistling.

At the end of the film, George's fur grows back and he has fully recovered from his decontamination, now working on his own on the new Laugh Floor making kids laugh instead of trying to scare them. He is seen carrying a watermelon and a sledgehammer, indicating that he is going to smash a watermelon with the hammer (a la Gallagher's Sledge-O-Matic gag).

George also appears in the company play "Put That Thing Back Where It Came From or So Help Me", a play directed, produced, written by and starring Mike.

During the special features clips available in some versions of Monsters, Inc., George is training for a football game. He is seen in the locker room getting ready, then it is revealed that they are not playing football, but watching football.

George appears in Monsters University as a member of the Jaws Theta Chi fraternity, competing in the Scare Games. When he and the rest of his fraternity are eliminated in the first challenge for using a protection gel against the toxic urchins, George and his fraternity brothers are sad and disappointed. A referee removes some of the gel from George and places an urchin near the exposed part, causing it to swell up as he screams in pain.

At the party in the Roar Omega Roar house, George does the same little dance he does in Monsters, Inc. on the Scare Floor just before the human sock is discovered and he's sanitized by the CDA.[1] George, along with his fraternity members, can be seen laughing at the Oozma Kappa fraternity as Roar Omega Roar humiliates them, although not so hard and it's implied that he only laughs with them because of group pressure.

At the end of the film, on Mike and Sulley's first day as scarers, he is present on the scare floor meeting his assistant Charlie, showing he was also hired as a Scarer.

During the credits, George appears on his own Scare Card after graduating from Monsters University. 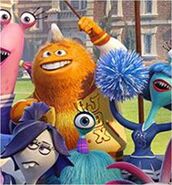 George dancing with the JOX fraternity

George and Charlie in the Scare Floor

George after recovering from decontamination