Geri's Game is an animated short film made by Pixar in 1997. It was written and directed by Jan Pinkava. It was the first Pixar short created after Toy Story, the previous short being Knick Knack. The film premiered on November 24, 1997 at Laemmle's Monica Theater in Santa Monica, California.[1] It then was released in US theaters on November 25, 1998 with A Bug's Life. The film won the Academy Award for Best Animated Short Film in 1998.

An elderly man named Geri plays a game of chess in the park against himself. He starts off playing as white, but then hoists himself up, and lumbers over to play as the black opponent. He quickly dominates the game as the black side, although he is his own opponent. As the game progresses, it looks like there are two people playing. But when the game is nearly over, White Geri (with glasses) fakes a heart attack to outsmart Black Geri (without glasses), and falls to the ground. This alarms Black Geri, and in turn, he tests his own pulse. While he is doing this, White Geri looks up, and flips the board around, inverting the players to their teams. He checkmates Black Geri, and makes him hand over a set of dentures as the prize. As the short ends with him giving a toothy grin, the camera backs out, revealing that there is only one Geri.

The old Pixar logo and Point Richmond PIXAR SHORTS can be seen on Geri's chess box. 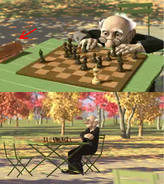 The chess box can be seen to be falling in the above scene, but it cannot be seen anywhere on the ground in the ending scene below.

The scene showing both of Geri's personas.
Add a photo to this gallery

Retrieved from "https://pixar.fandom.com/wiki/Geri%27s_Game?oldid=208710"
Community content is available under CC-BY-SA unless otherwise noted.