Edit this page
watch 01:33
House of the Dragon Trailer - The Loop
Do you like this video?
Play Sound

Grandma Paguro is a supporting character in the 2021 Disney•Pixar animated feature film, Luca. She is a sea monster, Luca's grandmother and Daniela's mother.

Grandma Paguro and Luca have an understanding. She sees the spark in her grandson’s eye, his longing for more, and celebrates it – albeit secretly. Grandma knows that breaking a rule or two is part of growing up, and she’s a little too happy to look the other way if Luca’s rebellious side should emerge. What his parents don’t know probably won’t kill them.[1]

In her sea monster form, Grandma has light magenta scales and purple "hair". She has light pink eyes with a faint yellow sclera and oval shaped pupils. Her tail is long and forms a twirl with purple caudal fins, and she also wears a dress and bandana, probably made from seaweed.

Unlike her daughter and son-in-law, Grandma is very supportive of Luca and his curiosity to explore the world above the surface. She also enjoys going up to the surface and spending the weekends there, which she kept as a secret from her family until celebrating Luca's victory at the Portorosso Cup. When Luca started going up to the surface to spend time with his new friend, Alberto Scorfano, Grandma was very intelligent to figure out what Luca was doing and did not say anything to Daniela, as she knew her daughter's overprotectiveness was preventing Luca from experiencing life beyond the ocean. When Luca ran away from home after his parents decided to send him to live with his Uncle Ugo, Grandma did nothing to stop him and chuckled over Luca running away from home.

After Luca winning the Portorosso Cup, Grandma allowed her grandson to go to school with Giulia Marcovaldo and bid him good-bye as she wanted him to achieve his dreams in seeing the world.

Role in the film

When Daniela takes her son Luca home for lunch time, the two pass by Grandma to which Luca happily greets her. During a conversation with Luca's family at home during lunch time, Luca asks his grandmother to know where do boats come from, to which she explains to him that they come from the human world above the surface, explaining to him that she beat a human during a game of playing cards, much to her daughter Daniela's shock about her fear of humans. When Luca asks his grandmother about being at the surface, his mother prohibits him from mentioning the human world because according to her, she warns her son about the dangers of the human world just before taking Luca back to work.

Later when Luca returns back to the ocean, he approaches his mother who is disappointed to know where he went to which his grandmother interrupts that she sent Luca to look for sea cucumbers to which Daniela explains to her mother that protecting Luca is more important than snacks. Later that night, Luca passes through his grandmother sleeping just before discussing with his parents.

During dinner time with Massimo, Grandma arrives and joins in with her family during pasta dinner where she explains to her daughter that she comes to Portorosso most weekends just as she explains to her daughter that Luca seems to find the good ones. Grandma and the rest of her family later approach Luca at the train leading to Genova where she bids a farewell to Luca just before leaving. 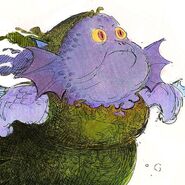 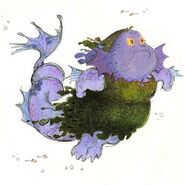