Gray is a character in Cars.

"Gray always knew that because of his size he'd be hauling cargo across country; gas, lumber, maybe even steel like his dad, but he never dreamt that the cargo would be seven time Piston Cup Champion, "The King" Strip Weathers." [1] 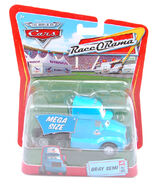 Gray's Hauler.
Add a photo to this gallery

Retrieved from "https://pixar.fandom.com/wiki/Gray?oldid=169818"
Community content is available under CC-BY-SA unless otherwise noted.