Cars
Greg Candyman races for the team "Tach-O-Mint" in the film Cars.

"Greg loves his Tach-O-Mint sponsorship, but there is one aspect he's not a fan of...the paint job. Gingerbread brown with candy cane type would not have likely been his first choice. Nor would it have likely been the first choice of a professional graphic designer, but it was however the first choice of the owner's four year old niece. Greg is also not a big fan of judging the annual contest in which fans build a likeness of him out of real gingerbread and gumdrops."[1] 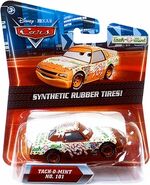 Candyman beside Chick Hicks racing on the MSS 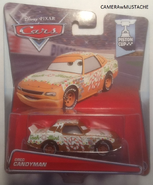