Raised in a run-down pet shop, Gurgle was covered in so much slime he thought he was green. After being sold, Gurgle was very grateful to the cleaner shrimp Jacques for revealing his true colors. Since then, Gurgle has sworn never to get his fins dirty again.

As a fish of finer feelings, Gurgle is reluctant to get too close to a real-life reef fish like Nemo. He is also quick to show his disgust at the escape plan that involves everyone making the water in the tank filthy.

Gurgle's rainbow colors reflect his feelings. When he's anxious, he turns a fetching shade of blue. Scummy slime and dangerous Darla are the two things guaranteed to have this effect on him.

"Not many members of the tank gang are brave enough to tell Gill that his escape plans are nutty, but this royal gramma fish likes to speak his mind. He was covered in green slime when he first arrived in the tank, and was very grateful to cleaner shrimp Jacques for cleaning him up and revealing his rainbow colors. Now he fears being contaminated again, and is reluctant to get too close to a real-life reef fish like Nemo."[1]

Gurgle is a royal gramma fish that resides in the dentist's office fish tank. He is a germophobic and incredibly pessimistic, doubting the possibility of Gill's plans working and getting increasingly nervous and frustrated when the plan to break the tank filter goes into motion. Regardless, he eventually escapes with the rest of the tank fish into the ocean.

"THE OCEAN!!! AAAAAAAAHHHHHHH!!! He hasn't been decontaminated yet!"
—A fearful Gurgle on Nemo's contamination.
"Ugh. The human mouth is a disgusting place!"
—A disgusted Gurgle's fear of human mouths.
Gurgle: This is not a Head strum file, that's a K-Flex.
Bloat: It's got a teardrop cross section, clearly, a head strum.
Gurgle: No, no. K-Flex.
Bloat: Head strum.
Gurgle: K-FLEX!!!
Bloat: HEAD STRUM-!!!! [inflates]
—Gurgle and Bloat arguing. 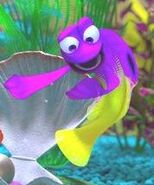