Harris, Hubert and Hamish are characters in Brave. They are the triplet sons of King Fergus and Queen Elinor and the little brothers of Princess Merida.

Harris, Hubert and Hamish are adorable, redheaded, and always ready to stir up a bit of mischief, especially if sweets are at stake. They can communicate wordlessly with their sly smiles, subtle glances and rascally giggles. This trouble-making trio is particularly keen on sneaking through the secret passages of the castle, mysteriously appearing out of walls, and playing clever tricks on everyone, especially their father, King Fergus. They share an extra special bond with their big sister, Merida, who is among the few who can actually tell them apart.[1]

Throughout the beginning of the film the triplets play numerous pranks to steal sweets. When Elinor is transformed into a bear, the Triplets help Merida, who bargains to give them a year's supply of desserts, to make her escape the castle by diverting Fergus and the lords away from Elinor. Using the secret castle passages, a frog on a stick and roaring into a vase, they lured and trapped them at the top of a watchtower. Afterwards, they see off Merida, who allows them to help themselves to a treat. But they are transformed into bear cubs after eating the magical cake. This, however, doesn't stop them from helping Merida again after she is imprisoned by their father as he chased after Elinor, who was mistaken for Mor'du. At Merida's urging, they pursued their nursemaid Maudie, who had the key. Afterwards, they then rode with Merida, as they chased after the hunting party. The triplets tackles Fergus, who was surprised when Merida reveal who they were. They return to their human form at the same time as Elinor, albeit naked.

As the three clans depart, the triplets stow aboard one of their boats. Fergus takes notice and chases after them in a rowboat with his two hounds. 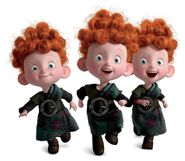 The triplets in bear form

The triplets at the table.

The Triplets transformed into bear cubs 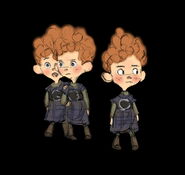