Headquarters is a location inside Riley's mind in Inside Out. It is the home of Riley's Emotions, Joy, Fear, Anger, Disgust and Sadness, who guide Riley through her life. It is the most direct connection between Riley's mind and the outside world and the site of production of the memories, which are stored temporarily in it. It also permanently houses the five core memories, which are stored in a special circular compartment.

Within the mind, Headquarters takes the form of an immaculate, round dome-like house on top of a thin stalk. It emits a bright, sunlight-like light. It is very high up and somewhat separated from the rest of the mind by the abyss of the Memory Dump. Its interior is overall of purple hues, very round with a somewhat organic, irregular quality.

At the center of Headquarters is a memory recall system which sends and receives memories from Long Term Memory via a vacuum tube. Along with the Train of Thought, it is practically the only way to reach Headquarters from the outside.

The front end of Headquarters features an oval screen which shows what Riley sees. Memories, daydreams as well as dreams can also be projected on it for Riley to see.

Just in front of the screen is a control panel covered with buttons and levers, which is one way by which the emotions can give their feedback to the situation Riley is in. It is also used to recall memories. When used, the console takes the hue of the Emotion(s) at the commands. On the right hand side, the control panel has slots to input chips which enable the projection of daydreams on the screen.

The walls bear numerous shelves which hold the memories of the day, along with several compartments where are kept Mind Manuals, which detail the workings of the mind, as well as daydream chips, which augment reality with imagination projection, and idea bulbs, which literally take the form of light bulbs. Emotions can suggest a specific idea to Riley (such as the idea of running away) by planting such an idea bulb into the control panel.

Five windows open on the wall opposite to the front screen, giving a view on the rest of the mind world.

At the end of the film, as Riley turns 12, a new, larger, upgraded console is installed in Headquarters, replacing the old one. It has many more buttons than the previous control panel, enabling a greater complexity in the emotions' response. It includes a library of curse words, and features a big alarm light with the inscription "puberty" that has not yet been activated. 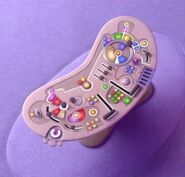 A top view of the console

Headquarters with an upgraded console
Add a photo to this gallery
Retrieved from "https://pixar.fandom.com/wiki/Headquarters?oldid=199790"
Community content is available under CC-BY-SA unless otherwise noted.