Heavy Metal Mater is the seventh short in the Cars Toons series.

At Flo's V8 Cafe, the cars are enjoying karaoke night (Guido is singing) and Lightning McQueen suggests that Mater sing. Mater replies that he doesn't want to steal the show, and then he tells Lightning about how he used to be a rock star.

The story starts with Mater singing in a garage band called Mater and the Gas Caps. They perform at the Top Down Truck Stop and Mia and Tia ask them if they had a record. Realizing they do not have a record made, the band heads over to a recording studio to make one. Everything goes well in the studio until the drummer is annoyed by a fly and tries to swat it by pounding on his drums heavier. The rest of the band has no choice but to play faster too, and Mater starts singing louder until the music gains a heavy metal sound.

A music agent named Dex likes their music and promises to make them famous if they acquire a new name. Mater thinks about this for a while, but before he could answer a heavyweight arrives and the delivery pitty asks "Where do you want this Heavy Metal, Mater?" The band subsequently changes their name to Heavy Metal Mater and they acquire a new Gothic rock look. They quickly become famous and win the world over with the hit song "Dad Gum," and all their concerts end with a giant Heavy Metal Mater balloon being released from behind the stage.

Meanwhile, Lightning becomes skeptical of this story when Mater says he was part of the band too. He finishes telling his story by introducing Lightning into the band, playing keyboard and singing with Mater. The short ends when Lightning suddenly notices the Heavy Metal Mater balloon rising above Flo's V8 Cafe, much to his shock.

Mia and Tia as waitresses at the Top Down Truck Stop. 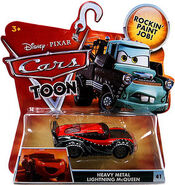 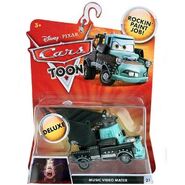 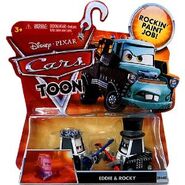 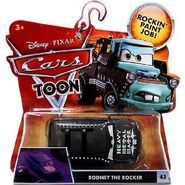 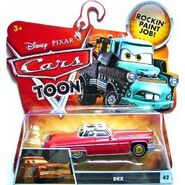