Mr. Waternoose breaks into a room where Sulley has went into and confronts Sulley, declaring he will kidnap a thousand children before he lets the company die. Knocking Sulley out of his way, he tries to grab Boo from the bed, but he instead grabs the simulation child. Just then, the wall goes up to reveal that Mike is behind the controls. Mike, who has recorded the confrontation between Sulley and Mr. Waternoose, plays back his favorite part to reveal Randall's plan to the CDA as Mr. Waternoose watches in bewilderment. With this incriminating evidence, the CDA turns on Mr. Waternoose and arrests him. As he is being dragged away, Mr. Waternoose angrily blames Sulley for destroying the company and making the energy crisis worse since there is no other way to get scream energy. Sulley and Mike seem to accept this until Mike mentions they have had some laughs, which inspires Sulley based on their experience with Boo. Laughter is proven to be ten times more powerful than screams as Monsters, Inc. comes back on top with Sulley as the new CEO, averting the crisis.

At the end of the first film, Waternoose gets taken to jail by the CDA after Randall's plan is exposed. While being dragged away, he yells at Sulley and blames him for "destroying" Monsters, Inc. and that it is his fault that the crisis will now get worse, believing screams were the only solution. However, it was revealed that Sulley ended up making it better for good, as well as replacing Mr. Waternoose as the CEO of Monsters, Inc.

Waternoose: "This has gone far enough, James."
Sulley: "She's home now. Just leave her alone!"
Waternoose: "I can't do that! She's seen too much. You both have."
Sulley: "It doesn't have to be this way."
Waternoose: "I have no choice. Times have changed. Scaring isn't enough anymore."
Sulley: "But kidnapping children?"
Waternoose: "I'll kidnap a thousand children before I let this company die! And I'll silence anyone who gets in my way!"

Waternoose is arrested for his alleged scheme for kidnapping children. 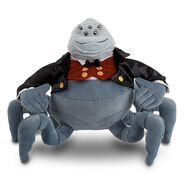 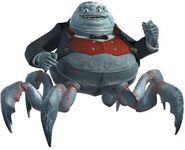 Retrieved from "https://pixar.fandom.com/wiki/Henry_J._Waternoose?oldid=201603"
Community content is available under CC-BY-SA unless otherwise noted.