"What are you lookin' at, ya hockey puck?"
—Mr. Potato Head

The Hockey Puck is a character from the Toy Story franchise who only appeared in the original film.

It is unknown what happened to Hockey Puck as he was not seen with the other toys on the moving van and he also was not seen at Andy's new house, inferring that he was either left behind or possibly belonged to Molly. However, in Toy Story 2, a Hockey Puck was seen in the yard sale and was picked up by Al.

His fate by the time of Toy Story 3 seems certain that he is gone, be it he was sold, lost, destroyed, or given away. 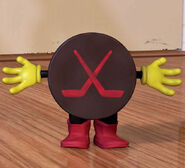 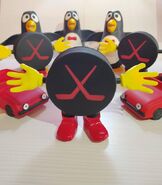