Coco
Mama Imelda is Miguel's great-great-grandmother in the Disney/Pixar 2017 movie, Coco. She is voiced by Alanna Ubach. She is the deceased matriarch of the Rivera family, and the founder of their successful shoemaking business. Miguel meets Mama Imelda in the Land of the Dead and discovers that she does not share his passion for music. Her daughter is Mama Coco, and her husband is Hector. After Hector left her and Mama Coco to pursue music, she declared him dead to the family unaware that Hector had actually been murdered before he could return home, and started the Rivera's shoe making business. However, she did finally soften towards Hector after learning the truth of why he never returned and by the end of the movie she appears to have fully accepted music back into her life.

As told by Miguel at the beginning of the film, Imelda was born in 1899 in Santa Cecilia, living there with her younger brothers, Felipe and Óscar. As she matured, she eventually fell in love with an aspiring musician named Héctor, partially due to their shared talent in music. Their romance soon developed into a marriage, and at 19 years old, Imelda gave birth to a daughter named Coco.

While Imelda was ready to settle down and raise Coco, Héctor wanted to give his music to the world, so he set out on tour with his then-friend Ernesto de la Cruz. However, he never returned, leaving Imelda to take care of Coco alone. Angered at Héctor for neglecting his family, Imelda tore his picture off the family portrait and decreed music was forbidden from then on.

Needing to support her daughter, Imelda turned to shoemaking as Coco grew up, often making shoes for her own daughter and becoming very good at it. Soon, she taught everything she knew about shoemaking to her daughter and son-in-law, and Coco taught her own daughters in turn. Working together with the growing Rivera clan, Imelda's hard work evolved into a family business.

When she reached her 70's, Imelda finally died and her spirit was sent to the Land of the Dead. Although Héctor was also a spirit in the realm, she disowned him from the clan despite his wish to reconcile with her. With her loyal spirit guide Pepita, Imelda looked after the Riveras who arrived after their deaths. Her ban on music would be carried out by the living Riveras though, especially with Abuelita.

It came to pass that she learned the truth Ernesto De La Cruz murdered her husband by poisoning his glass of wine he drank and Hector actually wanted to return home to his. So she changed her attitude to help her great-great grandson Miguel defeat Cruz with all her deceased relatives. She takes the stage singing "La Llorona" which means "Weeping Lady". Even as her efforts failed, she allowed Pepita to get rid of the murderer. In the Land of the Living, the truth behind Hector's dissapearance was also cleared out, allowing the Rivera family to end the ban on music that Imelda had enforced. The following Dia de Los Muertos, Imelda is seen dancing with Hector at a party.

"My family always, always puts my photo on the ofrenda!"

Imelda refuses to believe her photo has been removed from her family's ofrenda.

"That devil-box tells you nothing but lies!"

"We do not speak of that...musician!"

"He is dead to this family!"

"I give you my blessing to go home.."

"Two seconds and you already break your promise?!"

(Miguel: "You really hate music that much?!") "I will not let you go down the same path he did!"

Imelda & her relatives are dumbfounded, when Miguel leaves for the restroom. They know there are no restrooms in the Land of the Dead.

"He left this family!"

Imelda learns the truth behind her husband's death.

"I'm suppose to just forgive you?!"

Imelda on the stage with Ernesto

Imelda and Hector shocked to see that Ernesto has grabbed Miguel.

Imelda after being shoved by Ernesto. 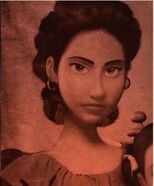 Add a photo to this gallery
Retrieved from "https://pixar.fandom.com/wiki/Imelda_Rivera?oldid=213446"
Community content is available under CC-BY-SA unless otherwise noted.