"Back to work."
—Tagline

It was revealed at 2017 D23 Expo that the sequel will have the characters the same age as they were in the first film and that it takes place immediately after the first film. Elastigirl will take a more prominent role as she is taken on an adventure, while Mr. Incredible stays at home and spends some time with the kids. Another plot description comes from an Instagram post, "Bob will try to lead with heroism a normal life in his house, having more time to spend with his son, Jack-Jack... whose superpowers are emerging!"[4]

When the Parr family's attempt to stop the Underminer from robbing Metroville Bank fails, the authorities become concerned over the level of damage caused by the incident. Rick Dicker informs the Parr family that his department's "Super Relocation" program is being shut down, forcing Supers across the world to permanently adhere to their secret identities; the last assistance he can offer is to put the family up in a motel for two weeks, since their home was destroyed in the incident with Syndrome in the first film. Soon thereafter, Bob and Helen, along with family friend Lucius Best – the superhero Frozone – are contacted by Winston Deavor, a superhero fan, telecommunications tycoon, and owner of DEVTECH. Winston and his sister Evelyn Deavor, the genius inventor behind DEVTECH technology, propose a publicity stunt to regain the public's support and trust in Supers.

Helen is selected to be the first to undertake the stunt by openly fighting crime in New Urbem, under her old identity Elastigirl, as she is the least destructive of the three. As part of the plan, Winston provides the family with a new home and Bob offers to take care of the kids while Helen is away on her mission. Bob struggles at first but gradually settles into the role of a stay-at-home parent. He is delighted at the discovery that Jack-Jack has various super powers, but has a hard time trying to manage the baby's abilities. Seeking help, Bob takes Jack-Jack to Edna Mode, a family friend and famous superhero-costume designer, who is fascinated with the baby's powers. Meanwhile on her mission, Helen confronts the Screenslaver – a mysterious villain who hijacks screens in order to project hypnotic images that can brainwash people.

After foiling attacks by the Screenslaver on a high-speed train and an Ambassador, Helen tracks down and manages to capture the villain, who is only a pizza delivery man and has no recollection of what he did; he is arrested and imprisoned at Helen's advice. While attending a celebration of the Screenslaver's defeat at DEVTECH, Helen further investigates and realizes that the man was actually being controlled by hypno-screens within his goggles. Before Helen can alert anyone, Evelyn Deavor overpowers her and forces Screenslaver's goggles onto her. Evelyn reveals herself to be the mastermind behind the Screenslaver. Her hatred for supers stems from her father's murder several years ago, where instead of hiding and calling the police from intruders, her father attempted to call the supers, but was unable to reach them and was discovered and fatally shot by the intruders. Seeing Supers as a threat to humanity's independence, she sought to undermine her brother's mission and plans to use the superheroes to cause a catastrophe that makes it impossible for them to ever be legalized again, which will result in thousands of deaths. Evelyn uses Helen to lure Bob into a trap and sends other mind-controlled supers wearing the goggles to attempt to put the Parr children under her control. Lucius defends the children before the mind-controlled supers subdue and hypnotize him with the goggles.

Violet, Dash, and Jack-Jack are able to escape; with the help of the Incredibile, a high-tech car once owned by Bob, they flee the house and locate the Deavors' ship. On board, the mind-controlled Helen, Bob and Lucius recite a vindictive manifesto on air to paint themselves – and Supers in general – as a public threat before they are freed from Evelyn's control by the children when Jack-Jack inadvertently frees Helen and displays other powers. Winston frees the other guests on the ship from Evelyn's hypnosis by destroying the giant screen projecting hypnotic images. A battle ensues between the Supers, threatening to crash the ship into Municiberg; all the mind-controlled Supers are freed from their hypnosis after the Parrs and Lucius destroy their goggles. However, Bob, Lucius and the kids manage to slow the ship down before it can destroy the city. Evelyn tries to escape in a getaway jet attached to the ship but is eventually stopped and captured by Helen. Following the incident, Evelyn is arrested; she indicates gratitude towards Helen for saving her from falling to her death for the plane, but still dislikes supers. Winston apologizes to Helen for being ignorant of Evelyn's plan, and Supers around the world regain full legal status.

A while later after the Deavor affair, Tony Rydinger, a boy at school who Violet had a crush on, agrees to a date with her at a movie. He leaves for the theater with the Parrs. However, at the theater the Parrs witness a car of bank-robbers armed with machine guns driving down the street. Violet leaves Tony at the theater, promising she would be back before the previews end. The Parrs then don their masks, ready to pursue the criminals.

On March 18, 2014, Disney CEO Bob Iger announced that Pixar had begun pre-production on Incredibles 2[5] with The Incredibles director Brad Bird working on the story.[6] Later that month, Samuel L. Jackson told Digital Spy that he would likely reprise his role as Frozone in the sequel.[7]

Bird announced in April 2015 that he has started writing the screenplay,[8] and confirmed in May that he will be making it after releasing Tomorrowland.[9] He has also added that it will not have a big focus on the superhero genre, saying, "I don't think that kind of idea stays interesting for very long... For me, the interesting thing was never the superhero part of it. It was more the family dynamic, and how do superhero things play into that?"[10]

In a reply Tweet in October 2015, Bird revealed that Michael Giacchino would be back to score Incredibles 2.[11]

During the D23 Expo event, Holly Hunter, Craig T. Nelson, Sarah Vowell, and Samuel L. Jackson were all confirm to be reprising their roles from the first film for the sequel, except for Spencer Fox, who went through puberty during the years since the first film and would be recast with a new child actor named Huck Milner. Bird also confirmed that he will also return to voice Edna Mode. It was also announced that John Ratzenberger will also return to voice the Underminer, as Brad Bird confirmed that the story will pick up immediately right after the first film ended.

Bob Odenkirk and Catherine Keener joined the cast in November 2017, in which they were confirmed to be voicing Winston Deavor and Evelyn Deavor, respectively. Jonathan Banks, Sophia Bush, and Isabella Rossellini also joined the cast on January 22, 2018. Bush and Rossellini were announced to be voicing new coming characters named Voyd and Ambassador. Banks was announced to be voicing Rick Dicker, replacing Bud Luckey due to his retirement in 2014, his declining health, and eventual death of natural causes in February 2018.

The first 10 minutes of the movie was shown at Disney California Adventure starting May 18th.

The film received highly positive reviews and an approval rating of 94% on review aggregator Rotten Tomatoes based on 173 reviews, it's consensus reads, "Incredibles 2 reunites Pixar's family crimefighting team for a long-awaited follow-up that may not quite live up to the original, but comes close enough to earn its name."[12]

Robert Abele of TheWrap gave the film a positive review by stating "Whatever the opposite of phoning in a sequel is, that's Brad Bird's progressive-minded, thunderously fun mix of super saves, throwback aesthetics and family comedy."[13]

The short film Bao, directed by Domee Shi, is attached to the theatrical release of Incredibles 2.[14]

In May 2018, the prose novel A Real Stretch was released by Disney Press. Written by Carla Jablonski, it focused on the exploits of Elastigirl before the events of the first film.

On March 28, 2018, Warner Bros. Interactive Entertainment and TT Games announced LEGO The Incredibles, a video game based off of the The Incredibles films. The game was released on PlayStation 4, Xbox One, Nintendo Switch, and PC on June 15, 2018.[15]

The film received a health warning due to scenes with flashing lights, particularly the scene of Elastigirl's fight with the Screenslaver in his strobe cage. Disney issued a statement to USA Today stating that they appreciated the efforts the theaters had already made in making signs warning people seeing the movie. They then asked theaters to warn audiences about the scene in a memo that read, "Incredibles 2 contains a sequence of flashing lights, which may affect customers who are susceptible to photosensitive epilepsy or other photosensitivities". Those scenes were edited for the home release to accommodate photosensitive viewers, except the 4K HDR version. (Digital and Blu-Ray)

Violet generating a force field around the family. 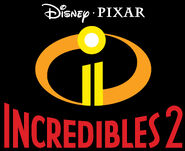 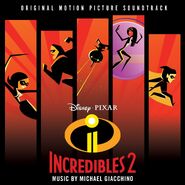