Cameos, in-jokes, re-used animation and other trivia from Inside Out.

The playground from Sunnyside Daycare in one of Riley's memories

Cars based off Hugos and a micro-car from Cars 2

A box alluding to Nemo, a deck of cards with Riley's family, and boxes recycled from Toy Story That Time Forgot 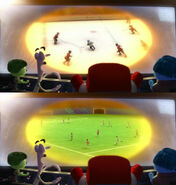 Colette Tatou from Ratatouille can be seen on the magazine.

The resemblance to clouds in Pixar's short Partly Cloudy

Resemblance to For the Birds

Forrest Woodbush from The Good Dinosaur

Arlo from The Good Dinosaur
Add a photo to this gallery

Retrieved from "https://pixar.fandom.com/wiki/Inside_Out_Trivia?oldid=210827"
Community content is available under CC-BY-SA unless otherwise noted.