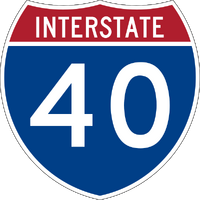 Wikipedia has an article related to:
Interstate 40

Lightning McQueen: "Whoa, look at that. Look, they're drivin' right by. They don't even know what they're missing!"
Sally: "Well, it didn't used to be that way."
McQueen: "Oh, yeah?"
Sally: "Yeah. Forty years ago, that Interstate down there didn't exist."
McQueen: "Really?"
Sally: "Yeah. Back then, cars came across the country a whole different way."
McQueen: "How do you mean?"
Sally: "Well, the road didn't cut through land like that Interstate. It moved with the land, you know? It rose, it fell, it curved."
—Lightning McQueen and Sally, talking about I-40

Interstate 40 is a major United States east-west interstate highway running from Wilmington, North Carolina to Barstow, California. I-40 appears in Cars. Lightning McQueen and Mack start their drive to Los Angeles from the Motor Speedway of the South, and are seen afterwards driving west on the Interstate during the "Life is a Highway" sequence. The interstate is responsible for bypassing Radiator Springs (to save 10 minutes of driving, according to Sally) causing Radiator Springs to lose all its popularity, visitors, and customers. The Top Down Truckstop is located along I-40.