"The point is, the Islands of Personality are what makes Riley, Riley."
—Joy, opening narration

The Islands of Personality are locations in Inside Out inside Riley's mind. They are the representation of the different aspects of Riley's personality that define her as a person. The islands float above the abyss of the Memory Dump and are connected by a long rod to Headquarters. All the islands usually appear colorful and have neons which glow at night. The features of a given island animate when Riley is expressing what it represents. Each island is powered by a core memory, a memory of greater importance that is stored in Headquarters. Without this core memory, an island turns gray and is susceptible to destruction and loss in the Memory Dump.

Following her family's move to San Francisco, Riley lost all her core memories in a traumatic incident. In the following two days, all the islands crumbled one by one, as they couldn't function when summoned without their core memory. Eventually, new core memories were created, and the five original islands were restored. Some of them, like Family and Friendship, were expanded. And several new Islands of Personality were created.

Family Island is by far the largest and strongest of the islands. It is dominated by a monumental statue of Riley surrounded by her parents, and includes family-related details like the family car, a swing or a genealogical tree. It notably incorporates a trampoline, which is used by Joy to finally get back to Headquarters at the end of the film. Family Island was the last island to stand following the loss of its core memory. Its resilience was such that, unlike the other islands, it didn't go down all at once but piece by piece, as Riley was running away. This island had entirely collapsed off-screen.

Family Island was also the first Island to be restored, now even larger than before as it incorporated elements from the landscape of San Francisco, such as the Golden Gate Bridge. It becomes Riley's central island, and is now powered by a both joyful and sad memory.

Goofball Island is Joy's favorite island, featuring many colourful wheels and a big sculpture of a goofy face. It represented Riley's childhood goofiness and was the biggest island after Family. Goofball Island was the first Island to be destroyed, which happened when Riley's father tried to make her smile by acting goofy. By the time Riley turned 12, Goofball had been restored, though in a slightly smaller form.

Friendship Island represented Riley's sense of friendship, especially with her best Minnesota friend Meg, at least in its original form. It featured merry-go-rounds, happy faces and an arch with stars and a heart. Friendship Island was lost one day after its core memory, when Riley (under Anger's control) got angry at Meg for getting a new best friend and so as a result ended her friendship with her for good. It was restored and expanded by the time Riley turned 12. A "friendly argument" section was opened.

Hockey Island represents Riley's love of hockey. Its features include giant representations of hockey material like sticks, skates and a helmet, along with a golden trophy. Riley lost this island after failing to play properly on the first tryouts at San Francisco, much to her anger. Hockey Island was eventually restored by a happy and angry memory.

Honesty Island represents Riley's sense of integrity. Its design includes a Greek temple and a justice court hammer. It was rapidly destroyed two days after its core memory was lost, when Riley saw and stole her mother's credit card. As the others, it was eventually restored. 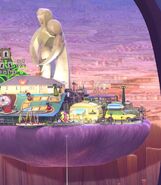 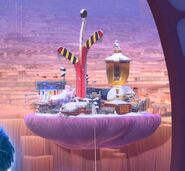 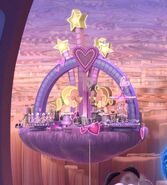 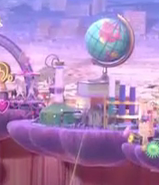 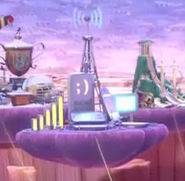 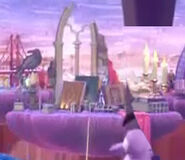